The simplest usage of the language is to find data stored in the database. For that, you can use one of the following clauses:

This clause is used to obtain data from Memgraph by matching it to a given pattern. For example, you can use the following query to find each node in the database:

Finding connected nodes can be achieved by using the query:

In addition to general pattern matching, you can narrow the search down by specifying node labels and properties. Similarly, relationship types and properties can also be specified. For example, finding each node labeled as Person and with property age being 42, is done with the following query:

You can use the following query to find their friends:

There are cases when a user needs to find data that is connected by traversing a path of connections, but the user doesn't know how many connections need to be traversed. Cypher allows for designating patterns with variable path lengths. Matching such a path is achieved by using the * (asterisk) symbol inside the relationship element of a pattern. For example, traversing from node1 to node2 by following any number of connections in a single direction can be achieved with:

If paths are very long, finding them could take a long time. To prevent that, a user can provide the minimum and maximum length of the path. For example, paths of length between two and four nodes can be obtained with a query like:

It is possible to name patterns in the query and return the resulting paths. This is especially useful when matching variable length paths:

More details on how MATCH works can be found here.

The MATCH clause can be modified by prepending the OPTIONAL keyword. OPTIONAL MATCH clause behaves the same as a regular MATCH, but when it fails to find the pattern, missing parts of the pattern will be filled with null values. Examples can be found here.

You have already seen how to achieve simple filtering by using labels and properties in MATCH patterns. When more complex filtering is desired, you can use WHERE paired with MATCH or OPTIONAL MATCH. For example, finding each person older than 20 is done with this query:

Additional examples can be found here.

For example, finding all Person nodes which have a name ending with son:

The RETURN clause defines which data should be included in the resulting set. Basic usage was already shown in the examples for MATCH and WHERE clauses. Another feature of RETURN is renaming the results using the AS keyword.

That query would display all nodes under the header named people instead of n.

When you want to get everything that was matched, you can use the * (asterisk) symbol.

RETURN can be followed by the DISTINCT operator, which will remove duplicate results. For example, getting unique names of people can be achieved with:

Besides choosing what will be the result and how it will be named, the RETURN clause can also be used to:

More details on RETURN can be found here.

These sub-clauses take a number of how many results to skip or limit. For example, to get the first three results you can use this query:

If you want to get all the results after the first 3, you can use the following:

The SKIP and LIMIT can be combined. So for example, to get the 2nd result, you can do:

Since the patterns which are matched can come in any order, it is very useful to be able to enforce some ordering among the results. In such cases, you can use the ORDER BY sub-clause.

For example, the following query will get all :Person nodes and order them by their names:

By default, ordering will be ascending. To change the order to be descending, you should append DESC.

For example, you can use this query to order people by their name descending:

Note that ORDER BY sees only the variable names as carried over by RETURN. This means that the following will result in an error.

Instead, the new variable must be used:

The ORDER BY sub-clause may come in handy with SKIP and/or LIMIT sub-clauses. For example, to get the oldest person you can use the following:

Collecting items into a map:

UNION and UNION ALL​

Cypher supports combining results from multiple queries into a single result set. That result will contain rows that belong to queries in the union respecting the union type.

Using UNION will contain only distinct rows, while UNION ALL will keep all rows from all given queries.

Restrictions when using UNION or UNION ALL:

For example to get distinct names that are shared between persons and movies use the following query:

To get all names that are shared between persons and movies (including duplicates) do the following:

The UNWIND clause is used to unwind a list of values as individual rows.

To produce rows out of a single list, use the following query:

More examples can be found here.

Patterns are used to indicate specific graph traversals given directional relationships. How a graph is traversed for a query depends on what directions are defined for relationships and how the pattern is specified in the MATCH clause.

Patterns in a query​

Here is an example of a pattern that utilizes the FRIENDS_WITH relationships from our graph: 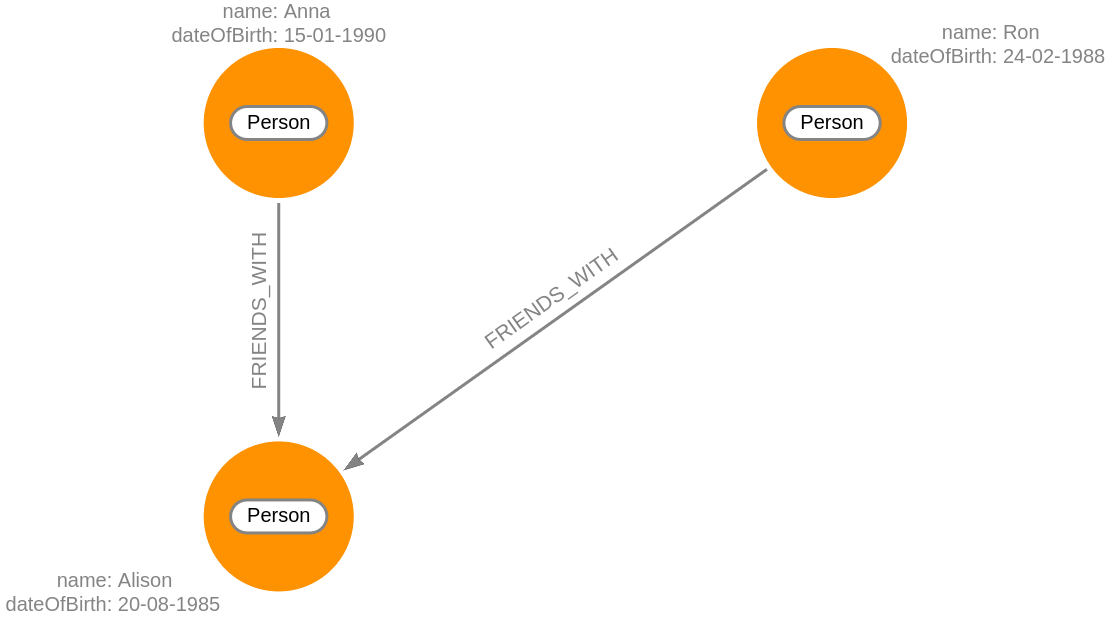 Because the FRIENDS_WITH relationship is directional, only these two nodes are returned.

When the relationship from the previous query is reversed, with the person named Alison being the anchor node, the returned results are:

We can also find out what Person nodes are connected with the FRIENDS_WITH relationship in either direction by removing the directional arrow from the pattern:

Since we have a graph, we can traverse through nodes to obtain relationships further into the traversal.

For example, we can write a Cypher query to return all friends of friends of the person named Alison:

Keep in mind that the first relationship is directional while the second one isn't. The output is: