Uninterrupted data and operational availability in production systems are critical and can be achieved in many ways. In Memgraph we opted for replication. 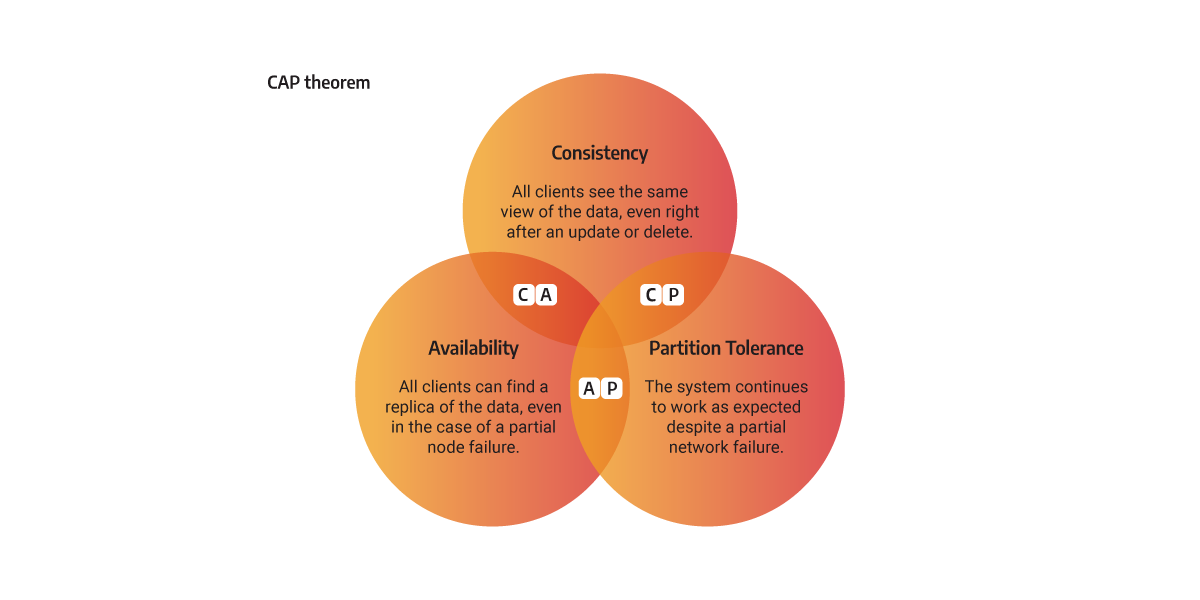 Most of the Memgraph use-cases do not benefit from well-known algorithms that strive to achieve all three CAP properties, such as Raft, because due to their complexity they produce performance issues. Memgraph use-cases are based on running analytical graph workloads on real-time data, demanding a simpler concept such as replication.

Replication consists of replicating data from one storage to one or several other storages. The downside of its simplicity is that only two out of three CAP properties can be achieved.

To enable replication, there must be at least two instances of Memgraph in a cluster. Each instance has one of two roles: MAIN or REPLICA. The MAIN instance accepts read and write queries to the database and REPLICA instances accept only read queries.

The changes or state of the MAIN instance are replicated to the REPLICA instances in a SYNC or ASYNC mode.

If the REPLICA is so far behind the MAIN instance that the synchronization using WAL files is impossible, Memgraph will use snapshots.

From version 2.4 it is no longer possible to specify a timeout when registering a sync replica. To mimic this behavior in higher releases, please use ASYNC replication instead.

Replication mode defines the terms by which the MAIN instance can commit the changes to the database, thus modifying the system to prioritize either consistency or availability. There are two possible replication modes implemented in Memgraph replication: 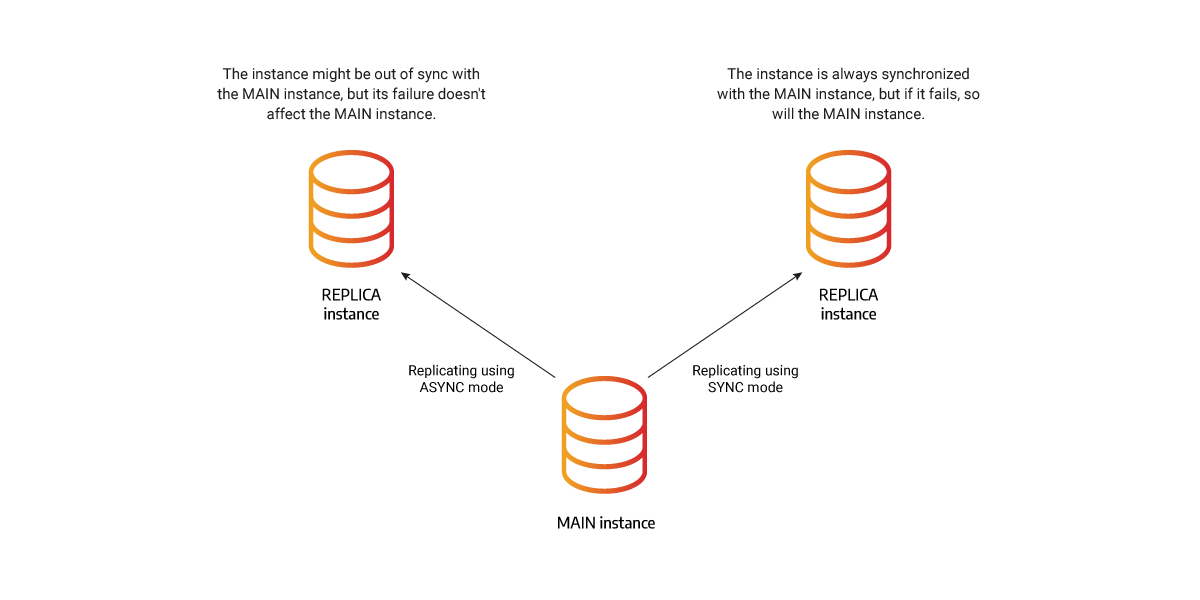 SYNC mode is the most straightforward replication mode in which the main storage thread waits for the response and cannot continue until the response is received or a timeout is reached. If the timeout is reached and at least one SYNC REPLICA has not sent back a response, then the MAIN instance will return an error to the user.
The error indicates that the user should check the status of the REPLICAs as there might be a network or hardware issue.

The following diagrams express the behavior of the MAIN instance in cases when SYNC REPLICA doesn't answer within the expected timeout. 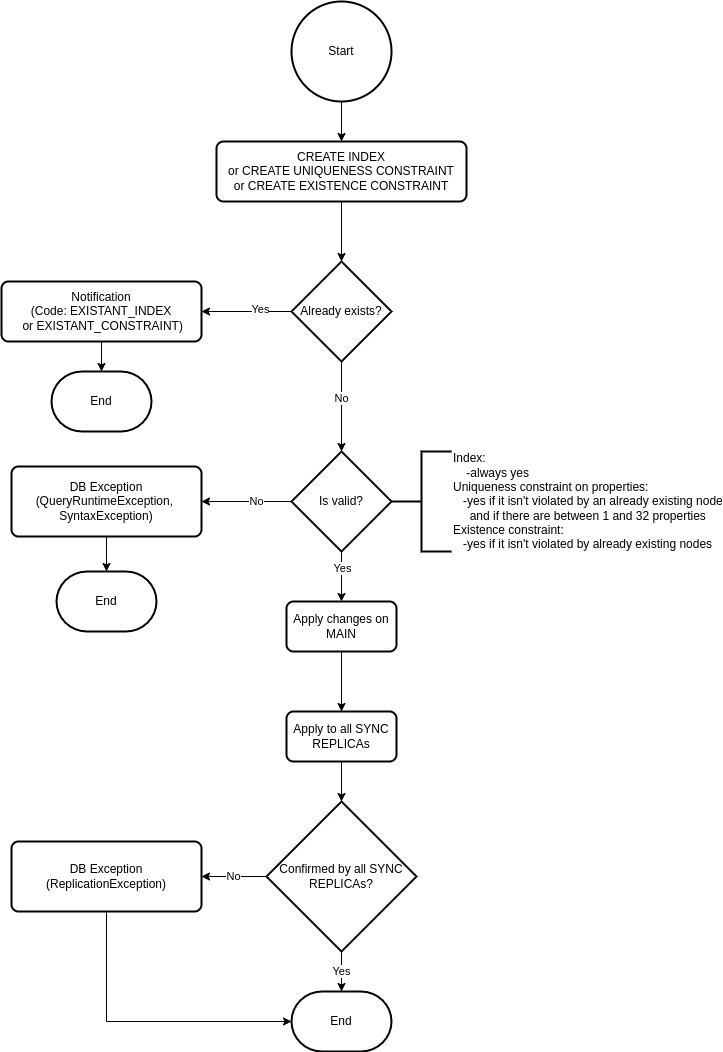 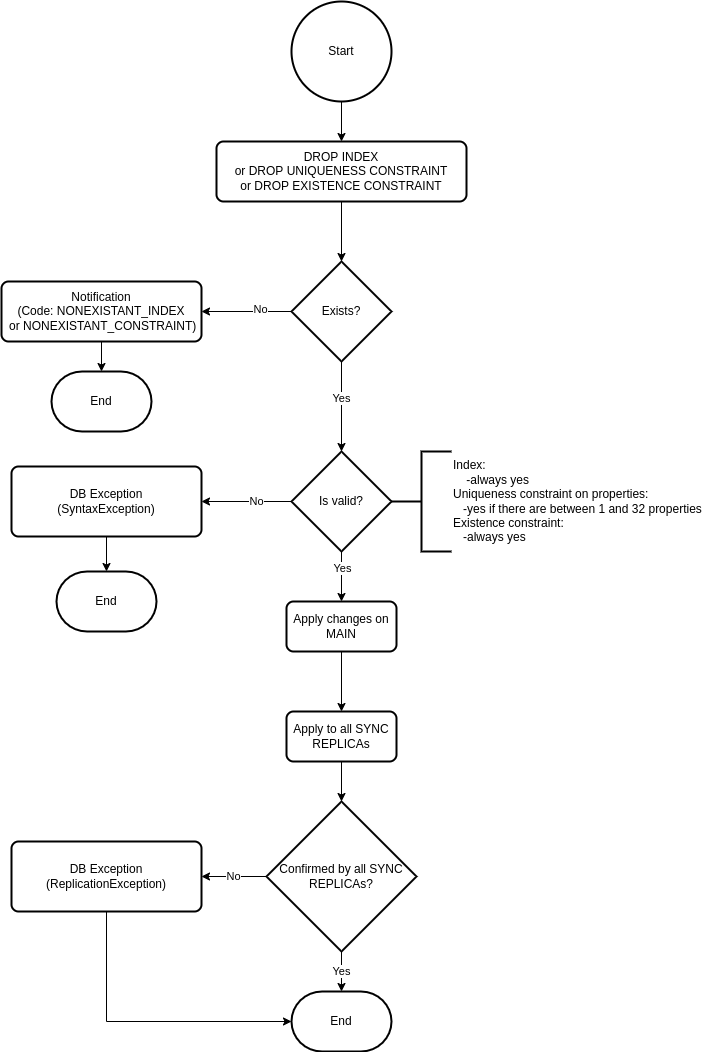 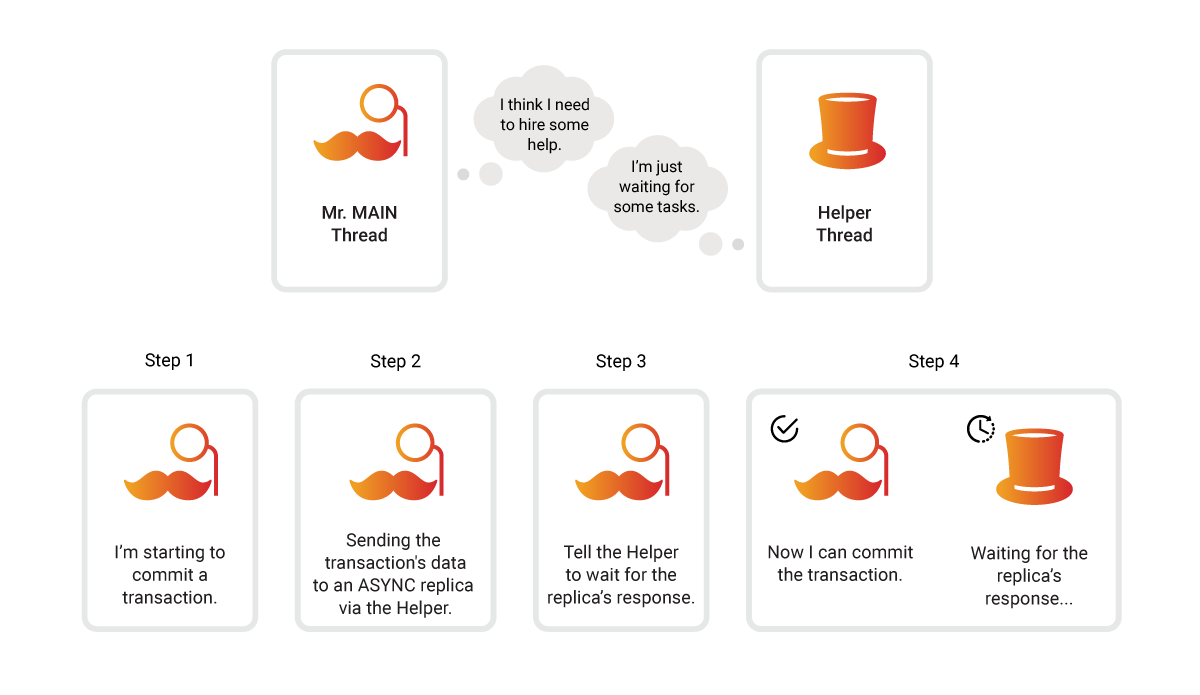 The missing data changes can be sent as snapshots or WAL files. Snapshot files represent an image of the current state of the database and are much larger than the WAL files, which only contain the changes, deltas. Because of the difference in file size, Memgraph favors the WAL files. 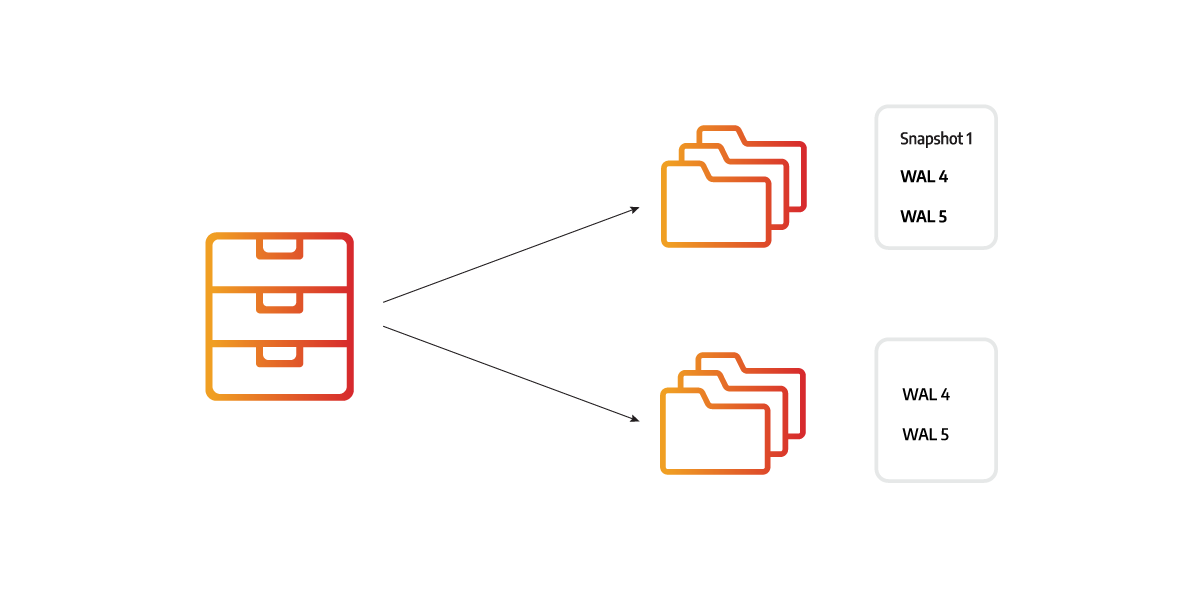 Imagine there were 5 changes made to the database. Each change is saved in a WAL file, so there are 5 WAL files, and the snapshot was created after 2 changes. The REPLICA instance can be synchronized using a snapshot and the 3 latest WAL files or using 5 WAL files. Both options would correctly synchronize the instances, but 5 WAL files are much smaller.

The durability files are constantly being created, deleted, and updated. Also, each replica could need a different set of files to sync. There are several ways to ensure that the necessary files persist and that instances can read the WAL files currently being updated without affecting the performance of the rest of the database.

Durability files are also used for recovery and are periodically deleted to eliminate redundant data. The problem is that they can be deleted while they are being used to synchronize a REPLICA with the MAIN instance.

To delay the file deletion, Memgraph uses a file retainer that consists of multiple lockers. Threads can store and lock the files they found while searching for the optimal recovery path in the lockers, thus ensuring the files will still exist once they are sent to the REPLICA instance as a part of the synchronization process. If some other part of the system sends a deletion request for a certain file, the file retainer first checks if that file is locked in a locker. If it is not, it is deleted immediately. If the file is locked, the file retainer adds the file to the deletion queue. The file retainer will periodically clean the queue by deleting the files that are no longer locked inside the locker.

Memgraph internal file buffer is used when writing deltas to WAL files, and mid-writing, the content of one WAL file can be divided across two locations. If at that point that WAL file is used to synchronize the REPLICA instance, once the data is being read from the internal buffer, the buffer can be flushed, and the REPLICA could receive an invalid WAL file because it is missing a chunk of data. It could also happen that the WAL file is sent before all the transactions are written to the internal buffer.

To avoid these issues, flushing of that internal buffer is disabled while the current WAL is sent to a REPLICA instance. To get all the data necessary for the synchronization, the replication thread reads the content directly from the WAL file, then reads how many bytes are written in the buffer and copies the data to another location. Then the flushing is enabled again, and the transaction is replicated using the copied buffer. Because the access to the internal buffer was not blocked, new data can be written. The content of the buffer (including any new data) is then written in a new WAL file that will be sent in the next synchronization process. 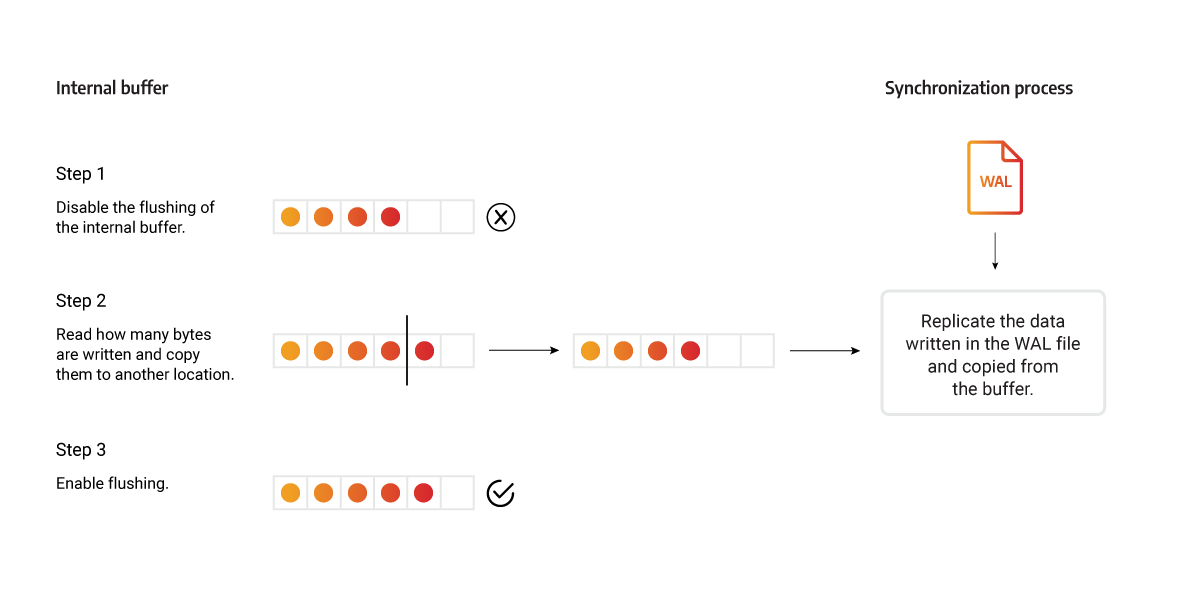 Timestamps are used to compare the state of the REPLICA instance in comparison to the MAIN instance. 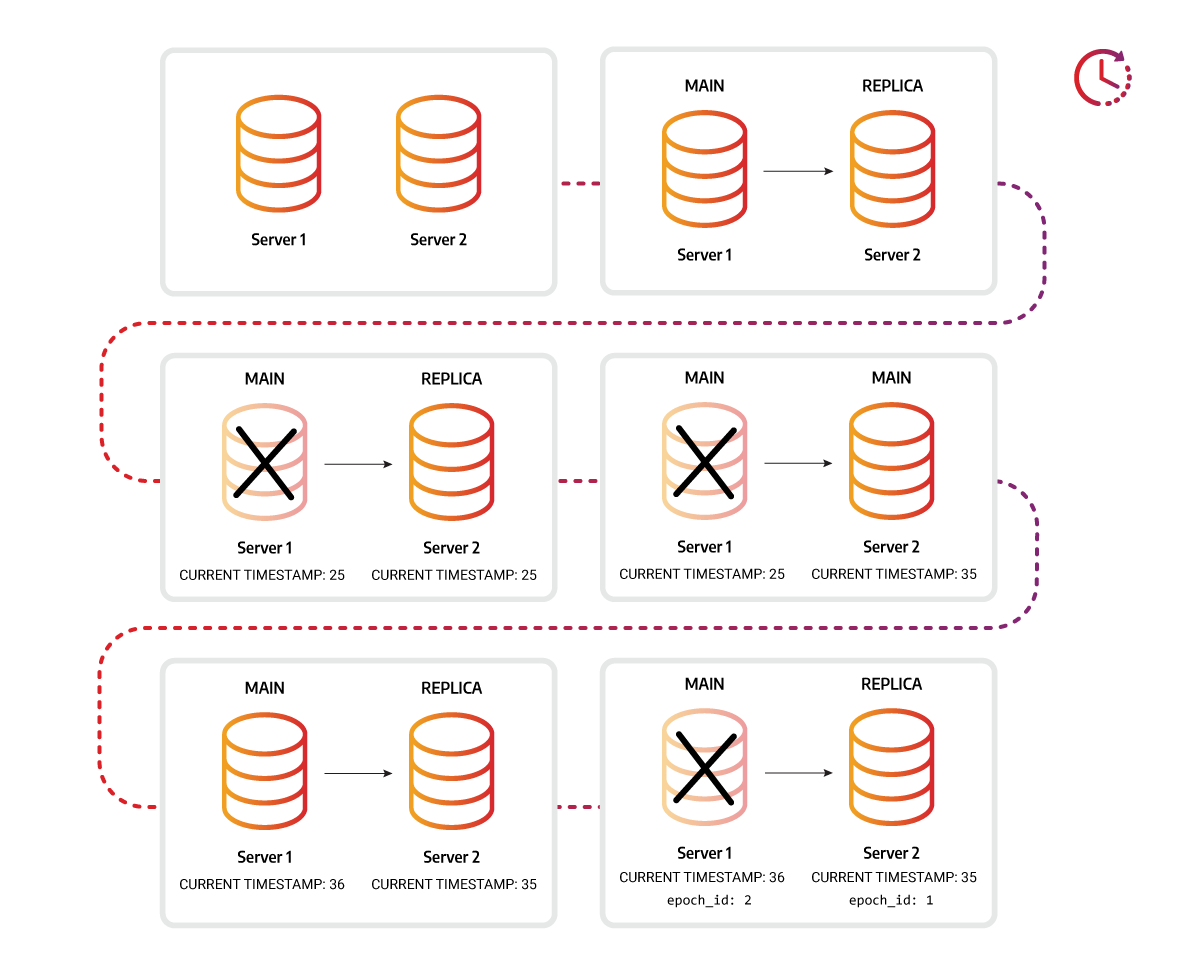