Certain applications require the special labeling of a graph called graph coloring. This “special” labeling refers to the assignment of labels (which we call colors) in such a way that connected neighbors must not be given the same color. Since this problem is NP-hard, there doesn't exist an algorithm that can solve the problem in a polynomial time. Therefore, various computer science techniques called heuristics are used to solve graph coloring.

Of course, the main part of the problem is in assigning a minimum number of labels. There are greedy algorithms that solve the problem, however not optimal. Using dynamic programming, the fastest algorithm guarantees O(2.44 ^ n) complexity. While on the other hand, there are heuristic applications like the one with genetic algorithms. 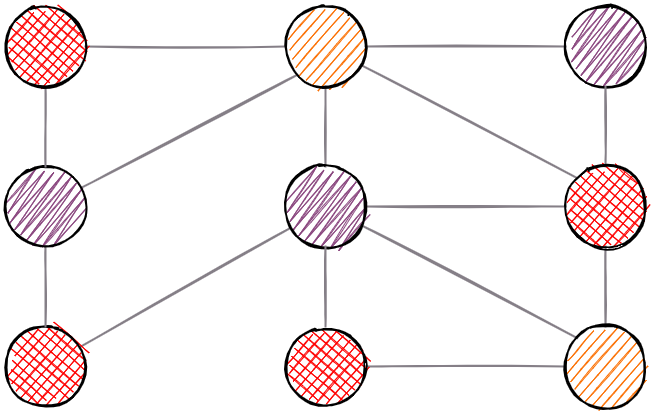 Example of graph coloring on a simple graph. Labels are denoted with different colors.

Graph Coloring is implemented as part of the MAGE project. Be sure to check it out in the link above. ☝️

Many problems can be modeled as the problem of coloring graphs. Basically, such problems are of an optimization and planning nature.

Problems such as assigning aircraft to flights or designing a taxi schedule, when shaped as graphs, are possible to solve using graph coloring. The coloring graph can help with conflicting systems, where there must not be any particular assignment, and such nodes are colored with other colors.

Therefore, careful code assignment (code planning) is required to prevent neighboring base stations from using the same code. If done properly, code assigning significantly reduces the number of errors that occur while the phone switches base stations.