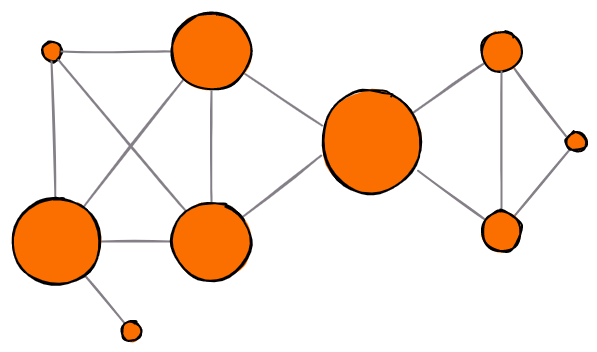 A larger circle means larger betweenness centrality. The middle one has the largest amount of shortest paths flowing through it.

Betweenness Centrality is implemented as part of the MAGE project. Be sure to check it out in the link above. ☝️

The metric of betweenness centrality can be used on a macro and micro scale in social networks. On a macro scale, a high measure will indicate the position of power (due to the large flow of information). On the other hand, on a micro-scale, a high measure represents the strength of a relationship with a narrow circle of friends.

Protein-protein interaction networks were created to get a better insight into how proteins interact with each other.

Maybe the most important usage of this algorithm is transportation. In a complex and urban transportation network, centrality measurement can reveal the main bottlenecks and congestions within the system. Such can help to organize the infrastructure of a big city, as well as the amount spent in optimizing such routes.