Dynamic Node2Vec is a random walk based method that creates embeddings for every new node added to the graph. For every new edge, there is a recalculation of probabilities (weights) that are used in walk sampling. A goal of the method is to enforce that the embedding of node v is similar to the embedding of nodes with the ability to reach node v across edges that appeared one before the other. 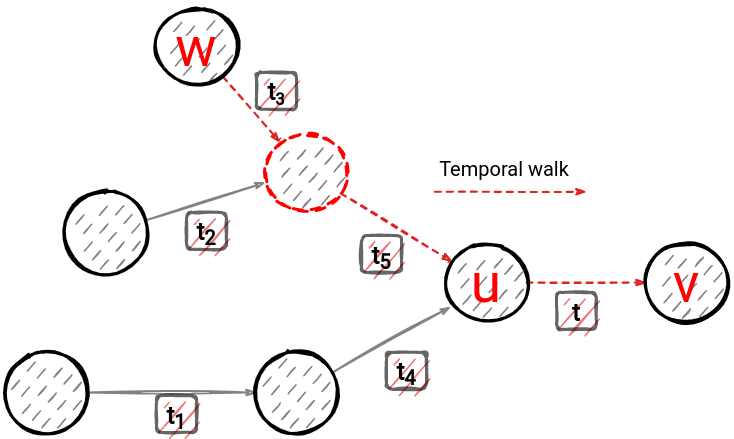 Many methods, like node2vec, DeepWalk, focus on computing the embedding for static graphs which has its qualities but also some big drawbacks.

Networks in practical applications are dynamic and evolve constantly over time. For example, new links are formed (when people make new friends on social networks) and old links can disappear. Moreover, new nodes can be introduced into the graph (e.g., users can join the social network) and create new links to existing nodes.

Naively applying one of the static embedding algorithms leads to unsatisfactory performance due to the following challenges:

Dynamic Node2Vec is created by F.Beres et al in the "Node embeddings in dynamic graphs".

Dynamic Node2Vec is implemented as part of the MAGE project. Be sure to check it out in the link above. ☝️

Many methods, like node2vec and deepwalk, focus on computing the embedding for static graphs which is great but also has a big drawback. Networks in practical applications are dynamic and evolve constantly over time. New links are formed, and old ones can disappear. Moreover, new nodes can be introduced into the graph (e.g., users can join the social network) and create new links toward existing nodes.

Dynamic Node2Vec can be used to find communities in social networks like Twitter, Facebook, and so on. In order to find communities, we first need to apply dynamic node2vec and then use an unsupervised machine learning algorithm, i.e. k-means which will find us clusters among node embeddings.

We can use dynamic node2vec in the case of link prediction. To do so, after obtaining node embeddings we can predict new links depending on the similarity of the node embeddings.