Vislet – Visualize Geographic Data in Memgraph Lab
Perform What-if Analysis of Your Network Directly in Storage Without Compromising Data Integrity
How to Visualize Connections in Insurance Data
How We Integrated Custom Css-Like Language to Style Graphs
How to Identify Essential Proteins Using Betweenness Centrality
Analyzing the Eurovision Song Contest With Graphs
BitClout - Who Are Content Creators Supported By? (Visualizing HODLers)
Modeling, Visualizing, and Navigating a Transportation Network with Memgraph 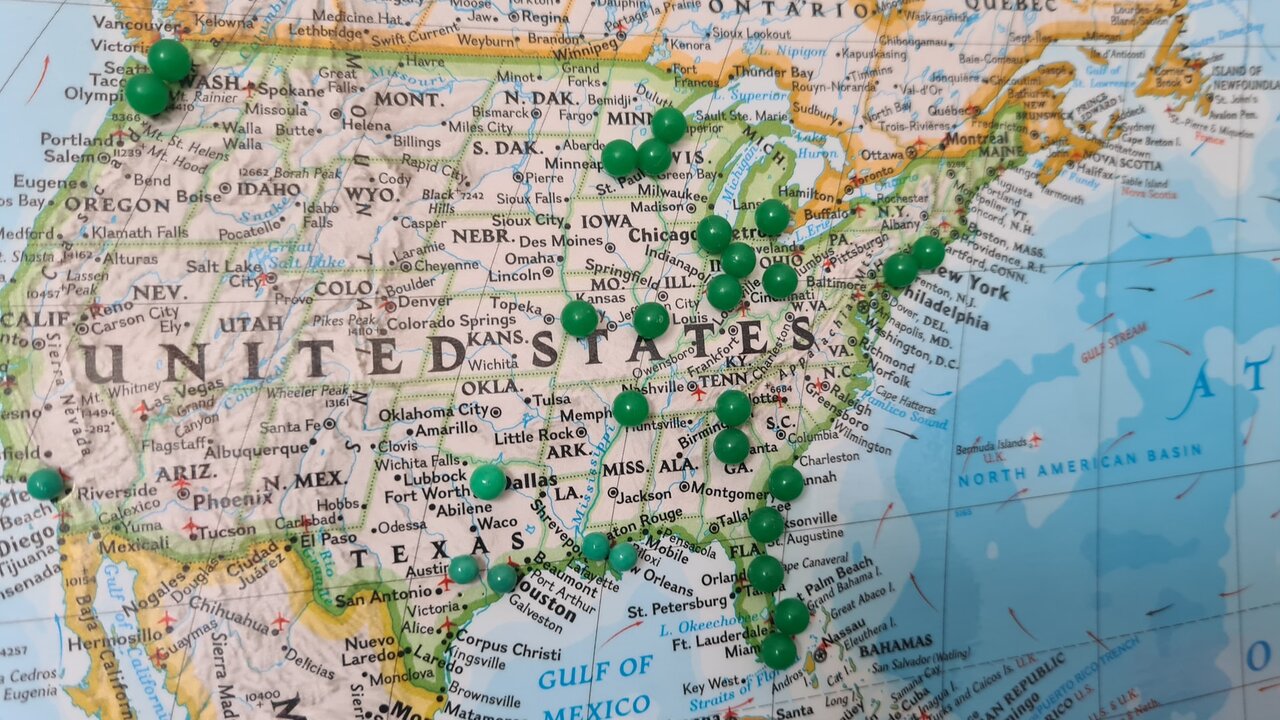 TLDR; You have graph data that consists of nodes and edges. Nodes contain geographic data (lat, lng). Your goal is to visualize graph data on a world map in Memgraph Lab.

In graph data visualization it’s important to extract properties of nodes and edges and visualize them in a memorable way. When you derive new visual information people make more sense of your data. In Memgraph Lab, visualizing any graph data is possible. With a new style scripting language you can dynamically customize your visual output to your liking. What about geographic data? Currently, there is no proper way to make use of latitude and longitude coordinates of each node with a style scripting language. For example, distances between countries can’t be shown visually and intuitively.

Example of such dataset – neighboring countries:

Geographic data makes sense only when you show it on a real-world map. Because of this, we created something specifically for visualizing both graph and geographic data in Memgraph Lab.

Vislet – a set of functions and event handlers that synchronize vis-network and Leaflet!

With Vislet, you can visualize a graph of neighboring countries in Europe: 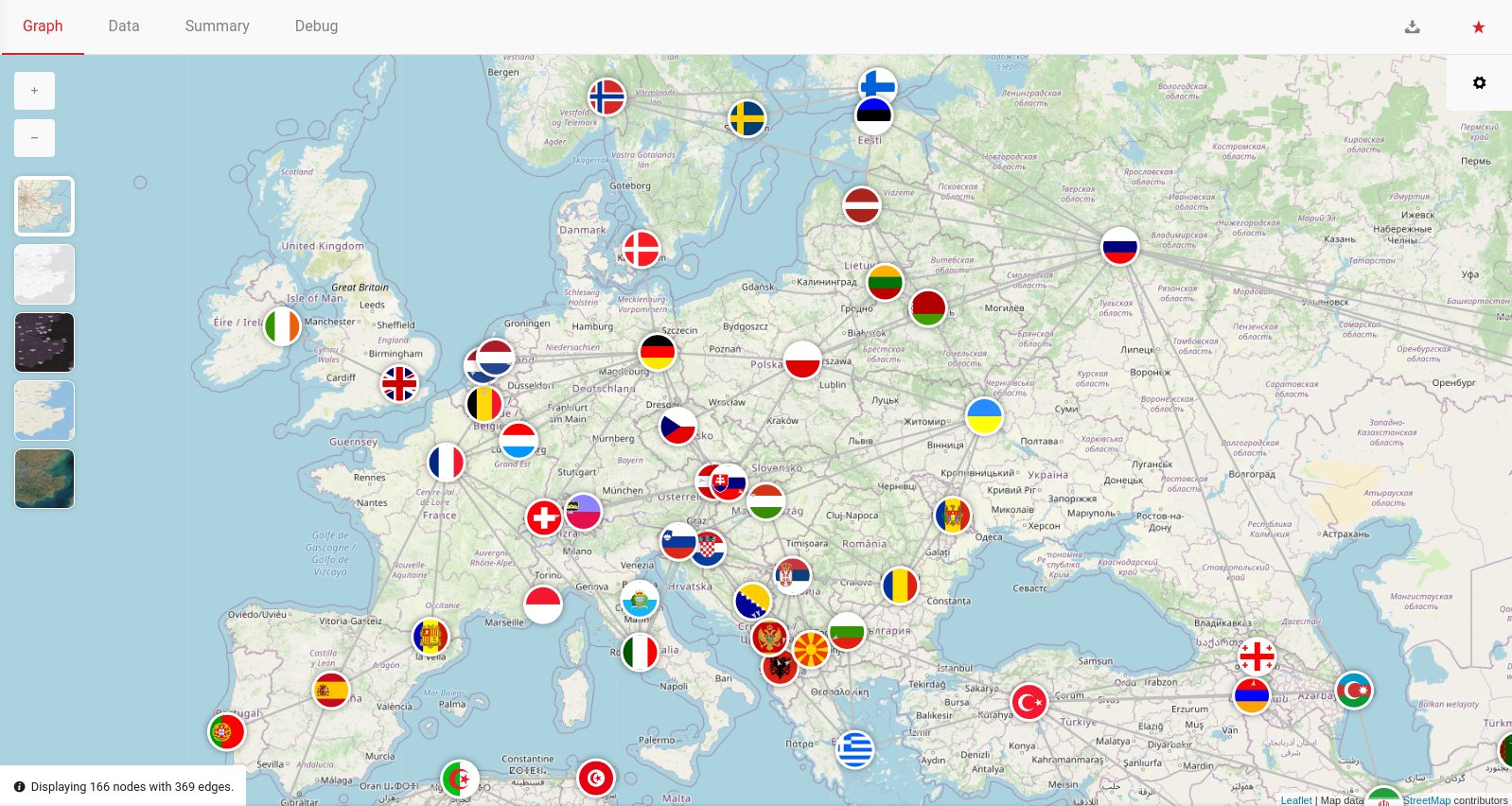 For storing, manipulating, and creating graph data, you need a query language. Cypher is a query graph language used in Memgraph. With Cypher, you can create nodes (countries) and edges/relationships (neighboring countries) between nodes. If you have no experience with Cypher, check out Memgraph tutorials. In Memgraph, you can also import the existing graph dataset. Importing of a graph dataset is supported for multiple dataset formats such as CSV or Cypher queries. When loading different dataset formats, you can follow these guides.

Here you can find the dataset of neighboring countries in Cypherl format.

Once you have successfully downloaded and imported the dataset into Memgraph:

Vislet will then show returned geographic nodes in Memgraph Lab on the map on their respectful lat and lng positions: 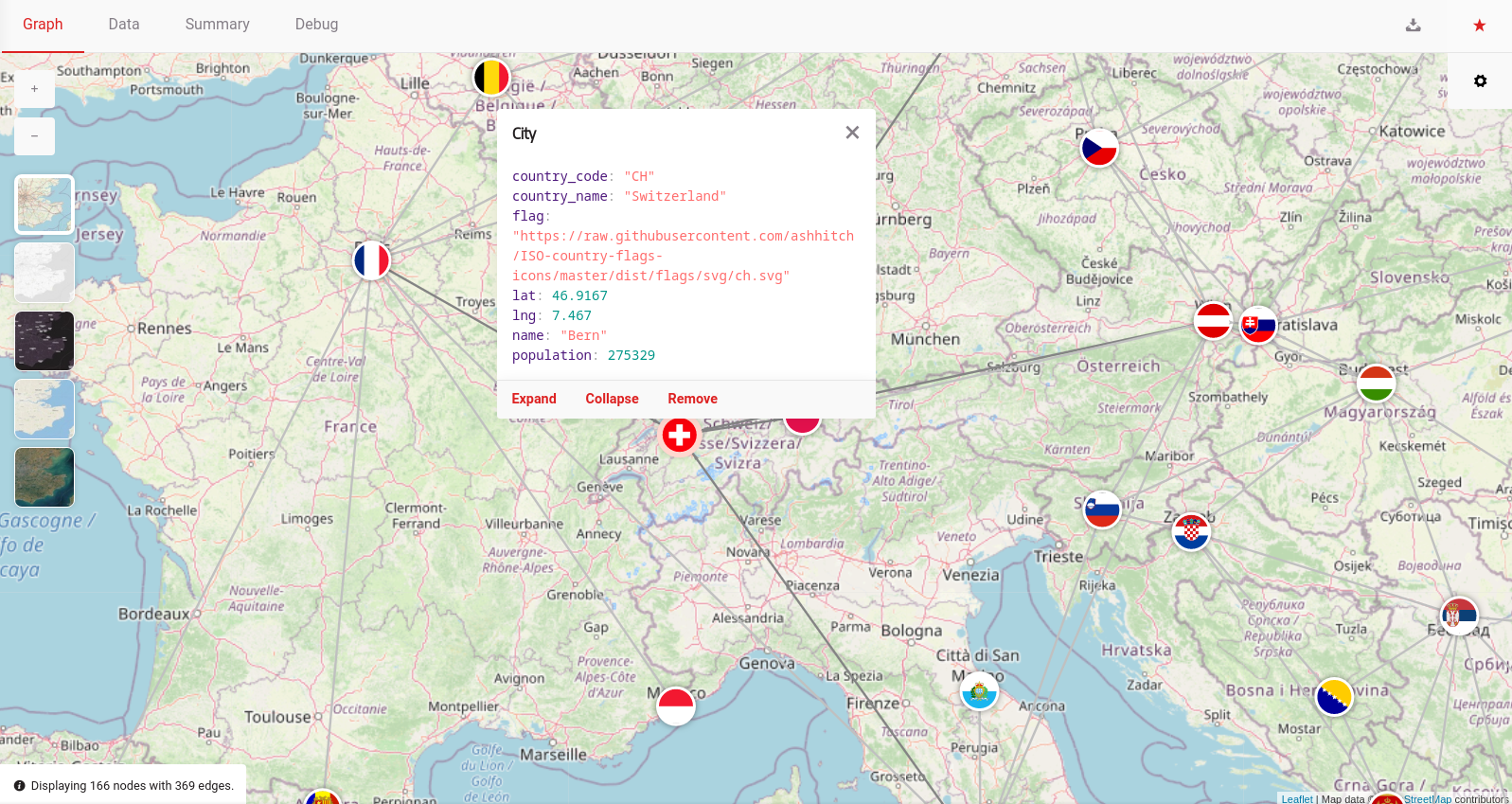 Clicking on the node to get more information as well as features such as expanding, collapsing and closing are still available in Vislet. Node dragging is disabled as nodes should stay on their lat and lng locations.

You can still use Memgraph Lab’s style scripting language. In the image, lat and lng properties are added to the node’s label while flag property is used for the node’s image.

The info text is located on the bottom-left side of the graph. There, you can see how many nodes are shown on the map. Information is formatted like this: Displaying X out of Y nodes, where X stands for a number of nodes with lat and lng properties while Y is a total number of returned nodes. Result of subtraction Y-X is a number of nodes without valid lat and lng properties. Such information is helpful to figure out if all returned nodes are possible to be drawn on a map.

The map won’t show nodes that don’t contain lat and lng properties. You can toggle the map with the Disable map background button after opening options with the ••• button. After you turn the map off, Memgraph Lab will return and show all nodes, both geographic and non-geographic. 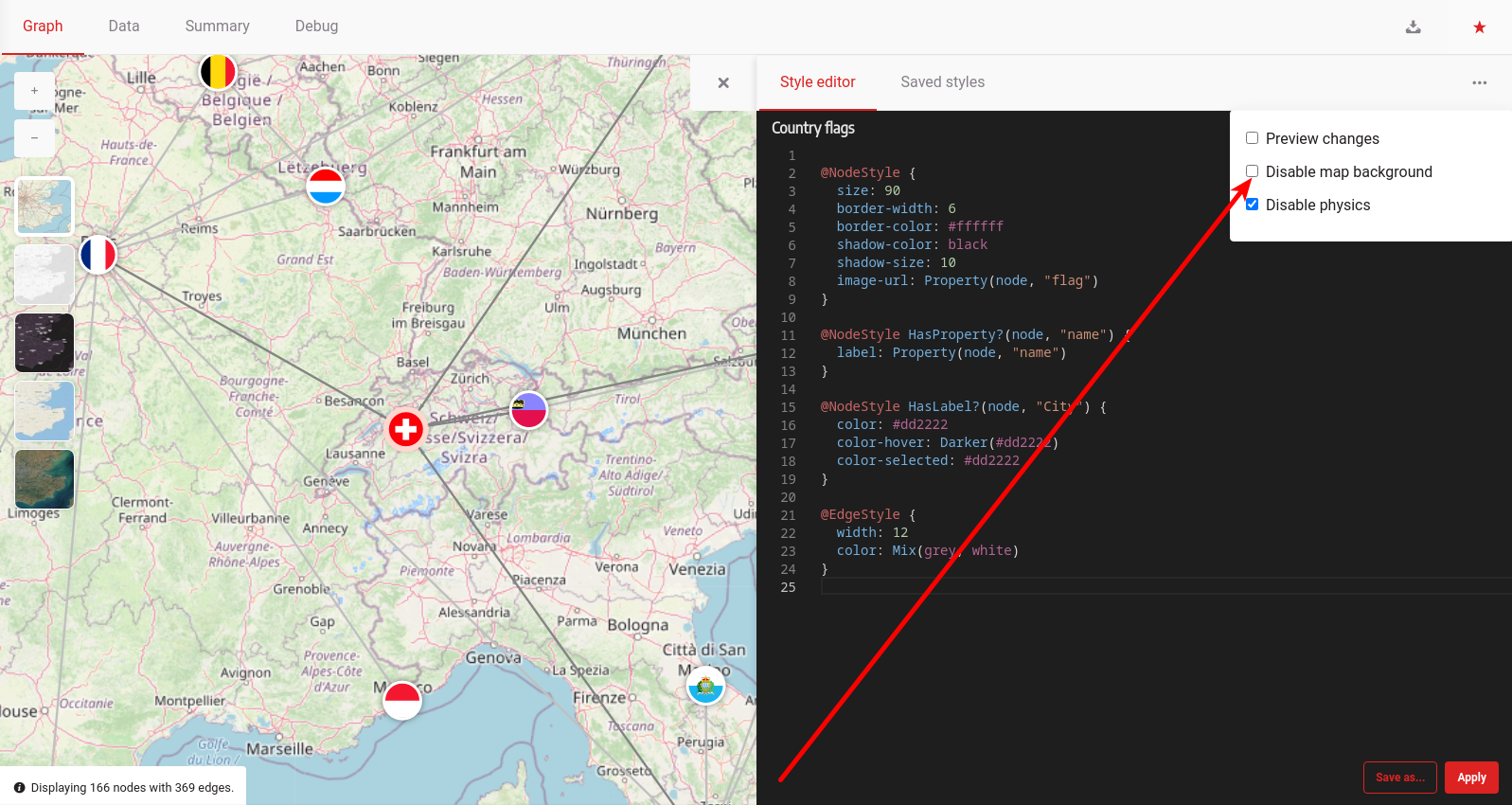 For Vislet, panning and zooming on the map aren’t a problem. You can pan and zoom on the map while nodes and edges will pan and zoom accordingly. Visual properties (e.g. size of the node, width of the edge) are scaled accordingly when zoom event occurs. Constant adjusting of style’s properties values, like size and width, won’t be necessary. Once you create a style, it stays intact and works on every zoom level!

vis-network and Leaflet map are rendered into their own HTML div elements: 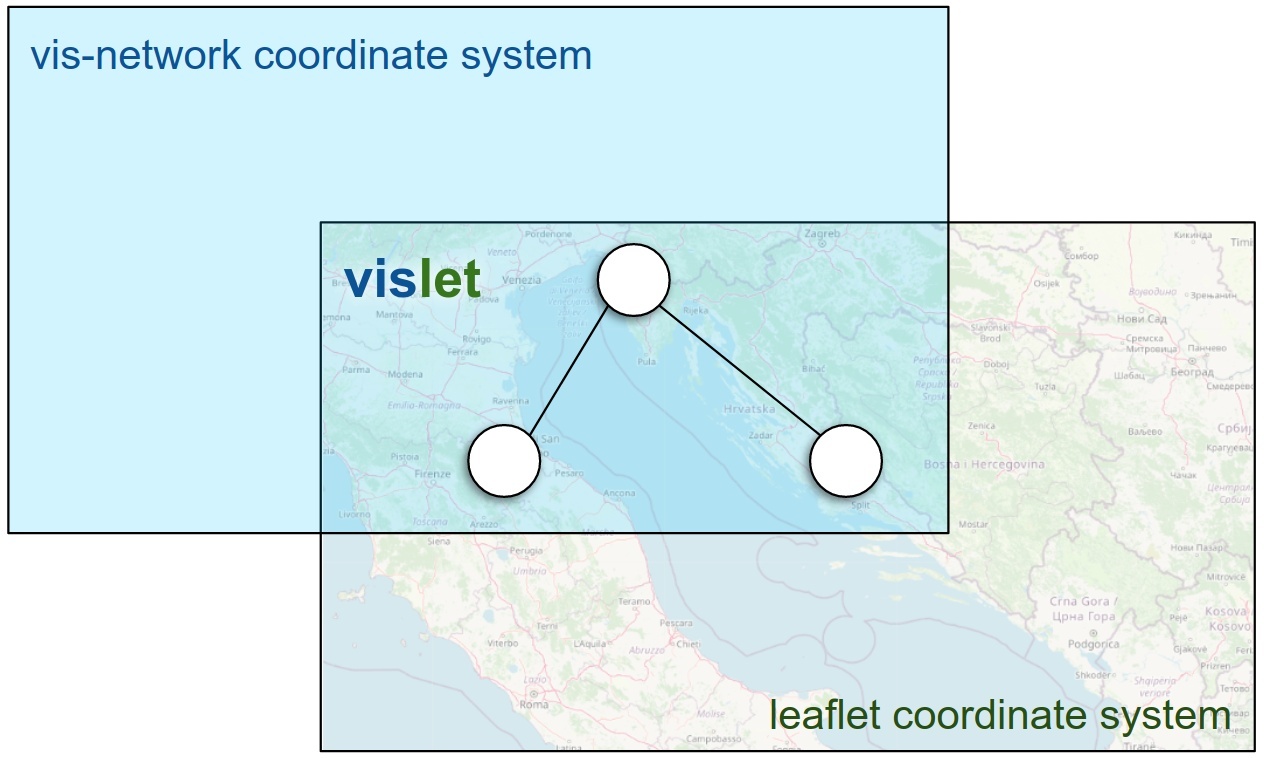 Find out how you can minimize decision-making risks when dealing with networks by using Memgraph as the one-and-only tool for a complete analysis.