In the spotlight - Antonio Filipovic

In the spotlight - Antonio Filipovic 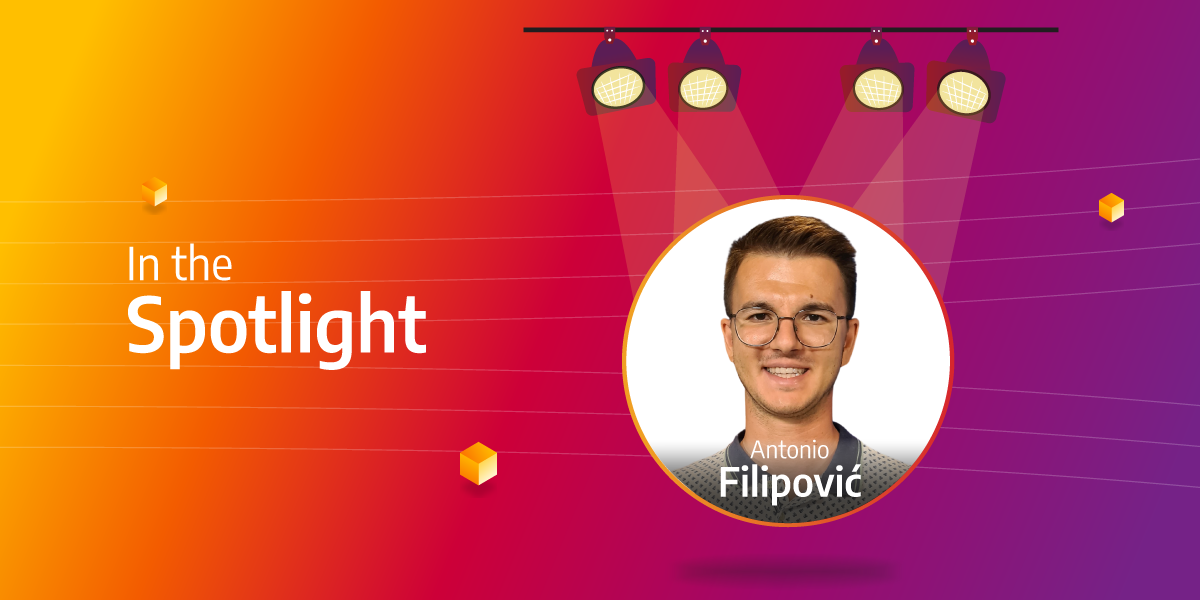 Antonio, also known as Fico, joined Memgraph almost three years ago! He started as a student in the Cloud team, but his career path changed as his interest increased. Without him, the MAGE library wouldn’t be as it is today, and at the time being, he has a huge role in the Solutions team by working on graph projections. Without further ado, let’s get straight to the point and find out more about Fico’s background, career path, and role in the interview below.

Q: Can you share something about yourself, what did you do before joining Memgraph?

Fico: Before joining Memgraph, I was completely focused on studying at the University of Zagreb, Faculty of Electrical Engineering and Computing. I was mostly focused on my exams and studying, working out, and combining beers with clubbing, of course. But I joined Memgraph during my third year of college, just after Covid-19 struck, and that’s when my career began.

Q: And what do you do exactly now at Memgraph?

Fico: Currently, I am part of the Solutions team. The team’s primary focus is working with customers, meaning implementing features that should help them have an even better experience with Memgraph and resolve issues they currently have. Another part of my work includes developing features that we, as a team, believe would drive Memgraph forward, depending on the input and/or guess we have. One of my favorite parts is working on MAGE and making it a graph library with the best experience for graph analytics to work. Lastly, the Solutions role also includes helping other teams, such as Marketing or Sales, to help us get new customers. Last month, the whole team worked on that part, which included a lot of writing and researching. During that, I was also working on wrapping up a new MAGE release, which includes Graph Machine Learning, which I am very happy to share with others.

Q: You’ve been in Memgraph for almost three years now! Can you tell me a bit more about which teams you have been to so far?

Fico: When I joined, I started working as part of the Cloud team, now called the Platform team, since they are working on a bunch of products. I worked there for close to one and half years. During that time, I was mainly working on Playground. Afterward, the whole team switched to revamping the Cloud product, and there I was working on the backend and making sure everything from starting Memgraph to monitoring Memgraph instance in AWS was completely covered and correctly working. At that time, the MAGE project in Memgraph started rapidly growing under another team’s jurisdiction. MAGE consists of a graph analytics algorithm that users can run on top of Memgraph. After a few transfer talks, with the help of Platform team lead Toni, I switched the team to MAGE. MAGE was still in the early phase. In the next nine months after the transition, I worked on dynamic graph machine learning algorithms like Temporal graph networks, integrating NVIDIA graph analytics - cuGraph, and working on a few other interesting algorithms. This summer, I started working on a graph projection feature for Memgraph, which usually falls under the Solutions team workload. Since they had other features to engineer, I took it as my new task. Soon after that, I switched the team and came to the Solutions. Now MAGE is part of Solutions, but my assignments include other usual Solutions team tasks.

Q: Recently, you switched from a student contract to a full-time employee. Was the transition a smooth process for you, and what exactly changed?

Fico: To be honest, it felt like there was no exact transition since I worked mostly full-time for my last semester of college during working on my Master’s thesis. What exactly changed is that now it is undoubtedly easier to meet deadlines and focus on my work at Memgraph because I don’t have laboratory exercises with a deadline on Thursday at 6 am :) I can easier help my team and take more responsibility for what is happening in the team and around the things I work on.

Q; Why did you choose to stay in Memgraph?

Fico: Mostly because the things I had a chance to work on are really challenging and interesting. Combine that with a product/solution, which will help many people solve their complex graph problems, and you have something worth working on. Furthermore, the atmosphere and people are really great.

Q: Why would you recommend Memgraph as a good place to work and develop your career path?

Fico: Because you can really learn a lot from other people, and you will be working on challenging tasks, and only that way can you become better in your career. On the other side, there are a lot of great benefits for employees, such as flexible working days, which are useful in certain situations.

Fico is also very active in writing blog posts! Check out what he recently said about graph projections and what problems graphs solve in traditional IAM systems.

If you like what Memgraph does, support us by giving it a star on GitHub!

We want to introduce you to Sasa, a frontend engineer on the Platform team responsible for developing and designing Memgraph Lab. In this blog post, Sasa talks about his onboarding experience and how he got his socks knocked off during the technical interview.