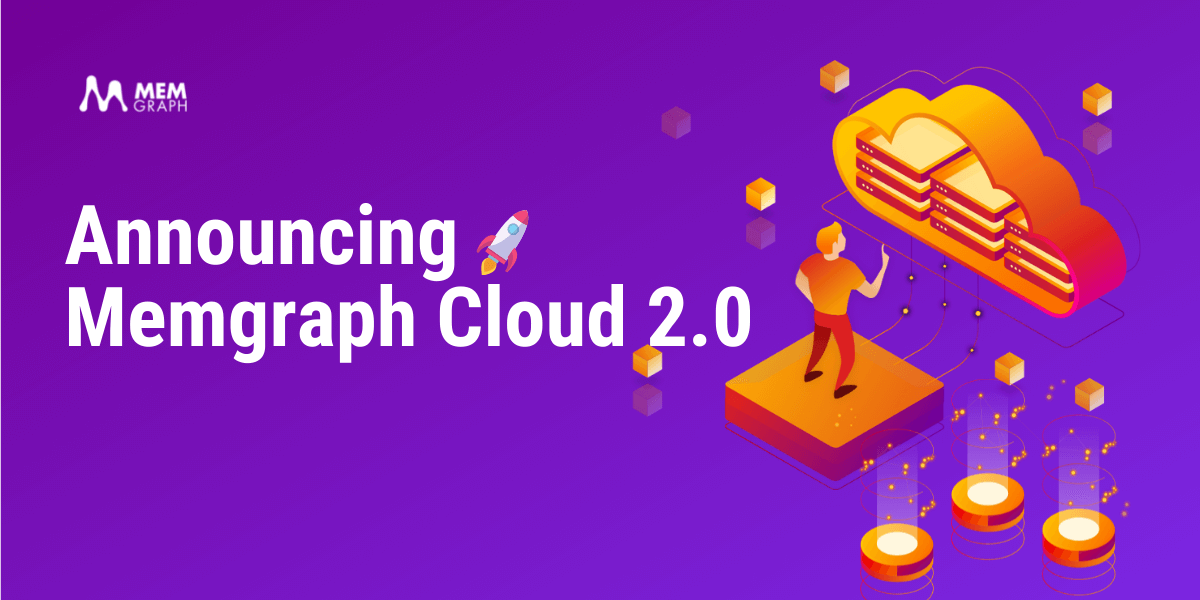 “The only constant in the technology industry is change.” — Marc Benioff

After months of hard work and user feedback, Memgraph cloud 2.0 is finally here! It is slicker and nicer than ever before with an improved overall developer experience. This might sound like yet another facelifting, but it’s far from it. This new release includes some major features you requested. You asked and we delivered. 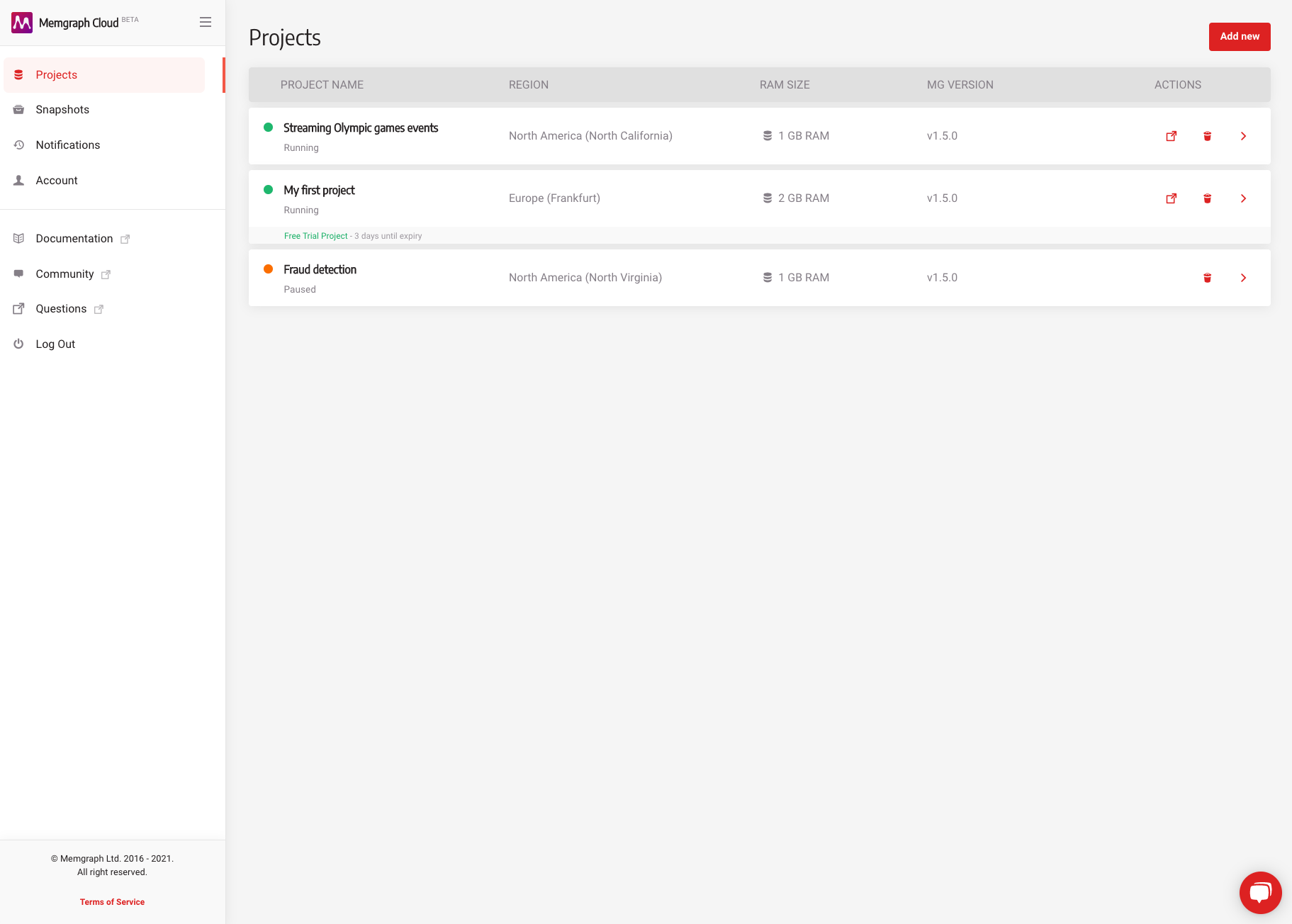 We understand that not everyone is excited about running and managing their database deployment. Sometimes, you just want to focus on developing your application and not worry about anything else. Memgraph Cloud is the easiest way to run Memgraph in the cloud. All you need is a web browser and a desire to explore the world of graph analytics. You can still download Memgraph and innovate with it locally, but with Memgraph Cloud you will be able to do get started in seconds without any waste of time on downloading, installing, configuring, and operating Memgraph.

Memgraph Cloud also comes with built-in authentication so you can easily share your graph project with your team by creating additional accounts.

Thanks to your feedback on our initial beta Cloud release, we added a tone of requested features along with a new and improved user interface. A lot has also been improved under the hood in terms of infrastructure and stability, but you might be more interested in the following features which you can see and feel:

Pausing and resuming your project

Although the "pay-as-you-go cloud pricing model is attractive, it can quickly lead to unexpected operating expenses is forget to turn off your instances when you’re not using them. Memgraph Cloud’s pricing consists of the three following items:

Memgraph Cloud 2.0 now offers a pause functionality that lets you pause your running Memgraph instance and pay only for the storage cost while the Memgraph project is paused. You won’t be able to interact and connect to the paused Memgraph instance, but you will be saving up to 18x of operating cost. This can be useful when you want to securely save the state but not use your Memgraph Cloud instance for some time. Once you are ready to continue your project, simply hit resume.

Working with your favorite programming language

There are many different ways to connect to Memgraph Cloud.

One of the easiest ways is by using our visual client, Memgraph Lab. You can connect to your running Memgraph Cloud instance with the in-browser Memgraph Lab or you can download the desktop version of Memgraph Lab and connect from your local computer. 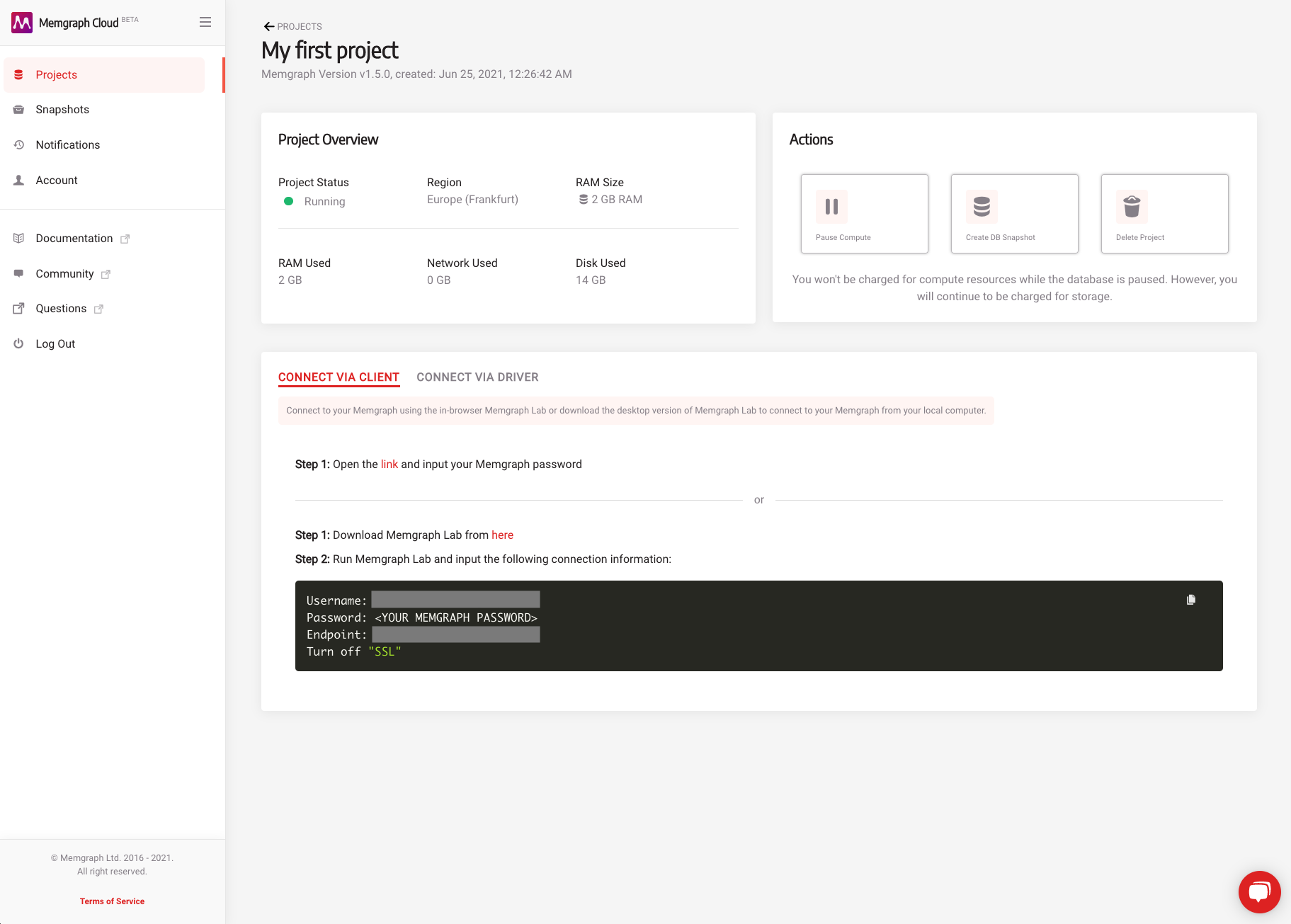 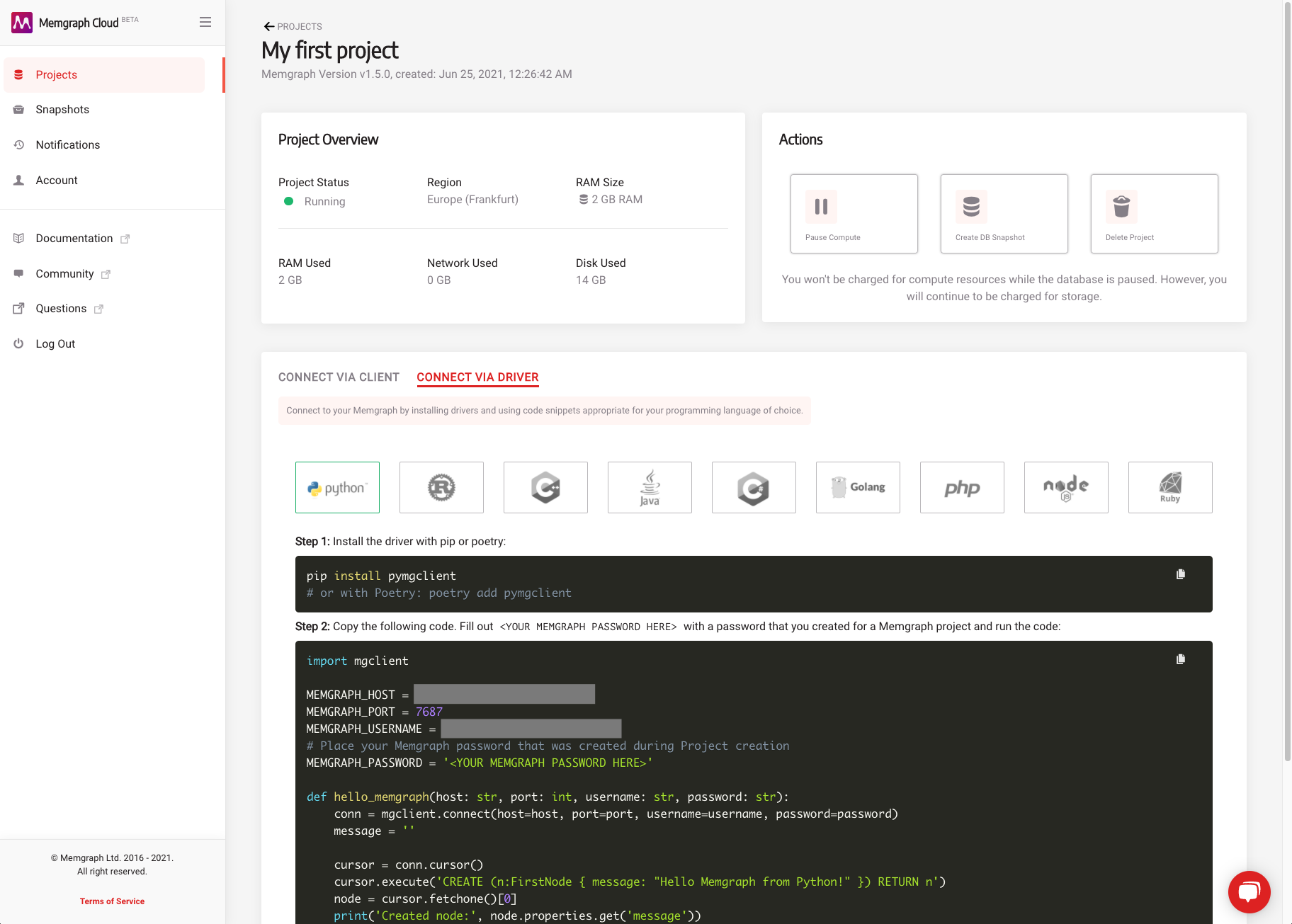 Backing up your data

You can think of a snapshot as a “data checkpoint”. Snapshots in the Cloud can be useful in two different situations:

Getting Started for Free

Memgraph Cloud uses a “pay-as-you-go” model where you will be charged by your hourly Memgraph usage. We understand the friction to try something out and pay for it right away, so to overcome that, upon registration you will be given a 14-day free trial period where you can run a single Memgraph project of 2GB RAM for free. No credit card needed, no charges whatsoever - 14 days of pure happiness with graphs, graph analytics, and a lot of ways to explore your connected data and extract meaningful insights. Check it out, and give us your thoughts.

Ready to get started? Create your free project with Memgraph Cloud now! 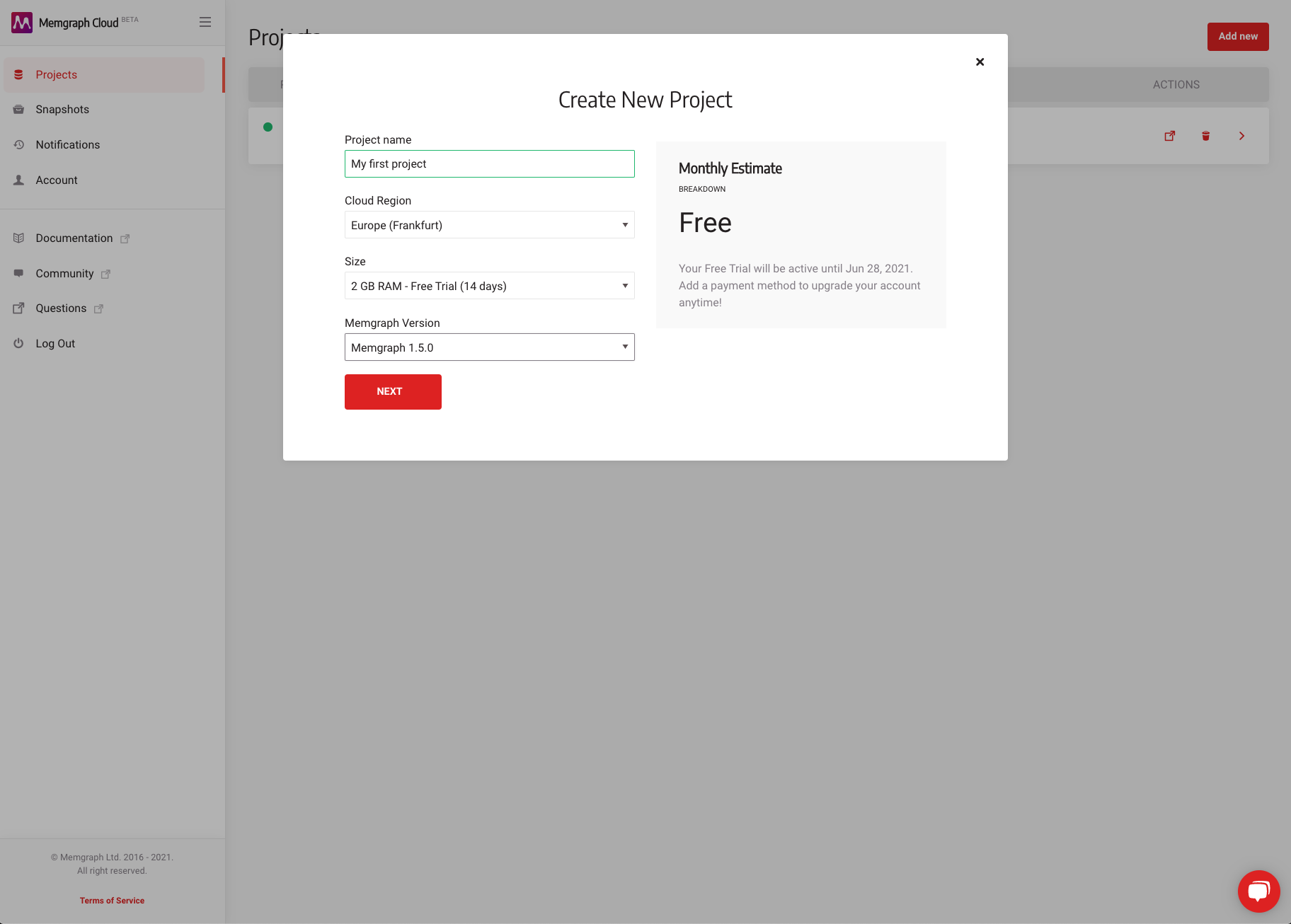