Applications of the 20 most popular graph algorithms

Applications of the 20 most popular graph algorithms 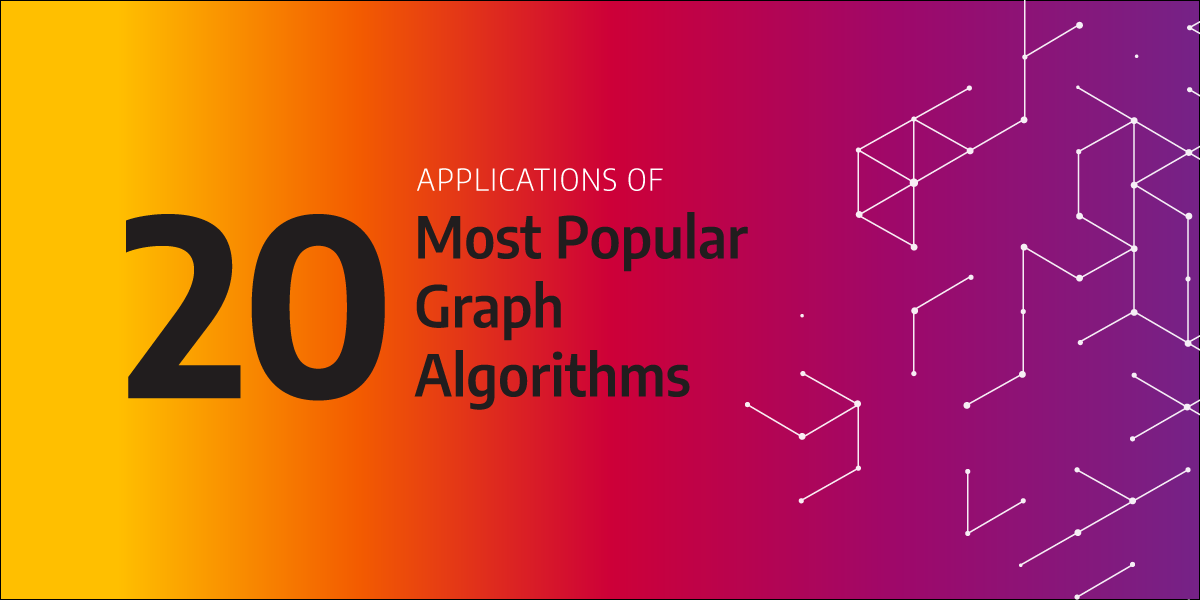 This article will explore 20 of the most common graph algorithms and various ways to use them in real-life scenarios. In recent years, graphs have become a valuable tool for real-world data modeling. They’re used in various fields, including economics, mathematics, physics, aeronautics, biology (for DNA analysis), etc. They have also found use in social media networks, websites and web links, and routes and locations in GPS. Let’s start with a little bit of theory.

What is graph theory?

Graph theory is the study of graphs and their properties. A graph consists of vertices (or nodes) and the edges (or relationships) connecting them. Graphs can be used to model real-world situations, such as social networks, transportation networks, or electrical networks.

What are graph algorithms?

Graph algorithms have a non-linear data structure of edges and nodes. The edges are arcs or lines that connect any two nodes in a graph. The following are some of the most common graph algorithms:

The breadth-first search algorithm finds the shortest path between two nodes in a graph. A graph traversal algorithm begins at the root node and works its way down through the adjacent nodes. Breadth-first search explores all of the previously unknown neighboring nodes for each new node discovered. When traversing using BFS, any node in the graph can be considered the root node. BFS is a repetitive algorithm when searching vertices of a graph data structure. It categorizes every vertex of the graph into two categories: visited and unvisited. It selects one node in a graph and visits all nodes adjacent to the one it selected.

Applications of the BFS algorithm

The depth-first search (DFS) algorithm is a graph-traversing algorithm that works its way down the graph data structure beginning from the root node through to the adjacent nodes. The DFS algorithm is a recursive algorithm that uses the idea of backtracking. It involves exhausting searches of all nodes by moving ahead if possible until there are no more nodes to explore in the current path, at which time it begins backtracking. The algorithm will follow the current route until all of the unvisited nodes have been visited, at which point a new path will be chosen.

The A* algorithm finds the shortest path between two nodes in a graph. It is similar to Dijkstra’s algorithm, but it is a more sophisticated algorithm that considers the cost of each edge in the graph. The cost of an edge is usually determined by its length or by some other measure of distance, such as time or money.

Applications of A* algorithm

The maximum flow algorithm is a graph theory algorithm used to find the maximum possible flow between two nodes in a graph. It is similar to the Ford–Fulkerson algorithm, but it is a more sophisticated algorithm that considers each edge’s capacity in the graph.

Fleury’s algorithm displays the Euler circuit or Euler path from a graph. The algorithm starts at one edge and moves adjacent vertices by removing previous ones. The graph gets less complicated in each step towards finding the Euler or circuit path.

Johnson’s algorithm finds the shortest paths between every pair of vertices in an edge-weighted directed graph. Edge weights can have negative numbers, but negative-weight cycles are not allowed. Johnson’s algorithm aims to reweigh all edges, make them positive, then run Dijkstra’s algorithm on each vertex.

A labeled graph is a graph with a set of labels or tags associated with each vertex and edge in the graph. The purpose of labeling a graph is to make it easier to identify the vertices and edges in the graph.

The topological sort algorithm is a graph theory algorithm used to find the order in which the vertices of a graph should be visited. The algorithm works by starting with the first vertex in the graph and visiting each vertex in order until all the vertices have been visited.

The Bellman-Ford procedure is a method for finding the shortest paths between a single source vertex and each of the other vertices in a weighted digraph. Give the algorithm a weighted graph, and it’ll return the shortest path between the selected node and all other nodes. It is similar to Dijkstra’s algorithm but slower. However, its versatility, which means it can handle both negative-weighted and positive-weighted edges, makes it a popular choice.

A greedy algorithm is an algorithm that always chooses the best possible option at each step without considering future steps. The algorithm typically starts with a small solution and then improves it by making local changes that do not affect the global optimum.