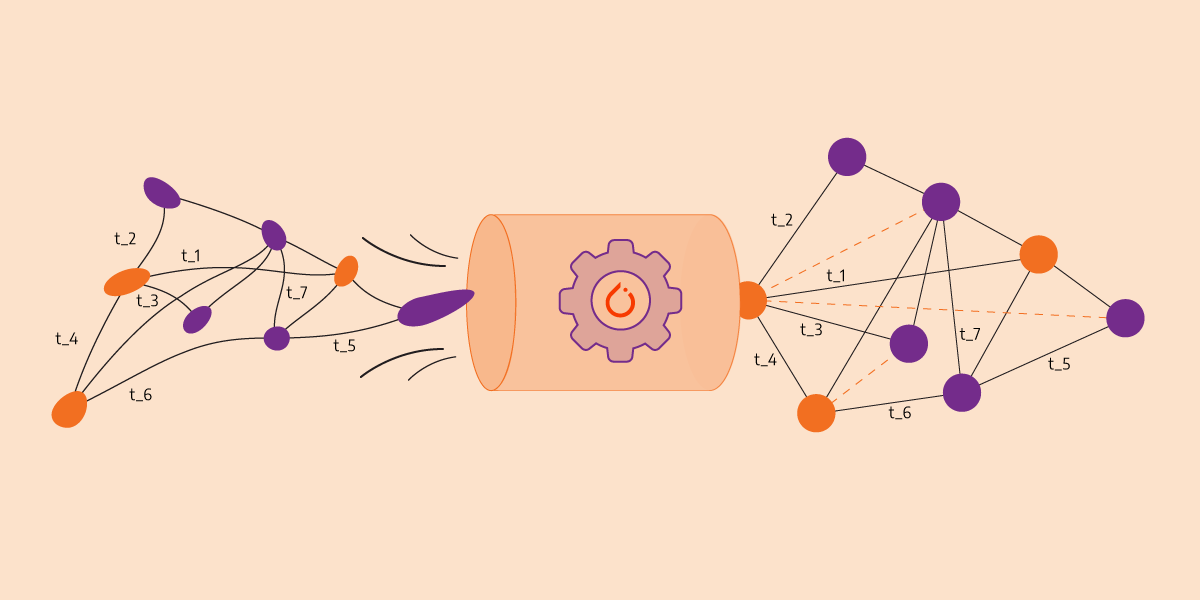 Over the course of the last few months, we at Memgraph have been working on something that we believe could be helpful with classical graph prediction tasks. With our latest newborn query module, you will have the option of performing both label classification and link prediction.

But, how come a query module can do both label classification and link prediction? It’s all thanks to graph neural networks, for short GNNs. ❤️

Whether you are a software engineer or a deep learning enthusiast, there is a high chance you heard of graph neural networks as a rising ⭐. Maybe you even deep-dived into this topic and are now ready for a new MAGE spell. But even if you haven’t, don’t worry, I will try to give you a quick overview so you can catch up and follow along.

You probably already know that a graph consists of nodes (vertices) and edges (relationships). 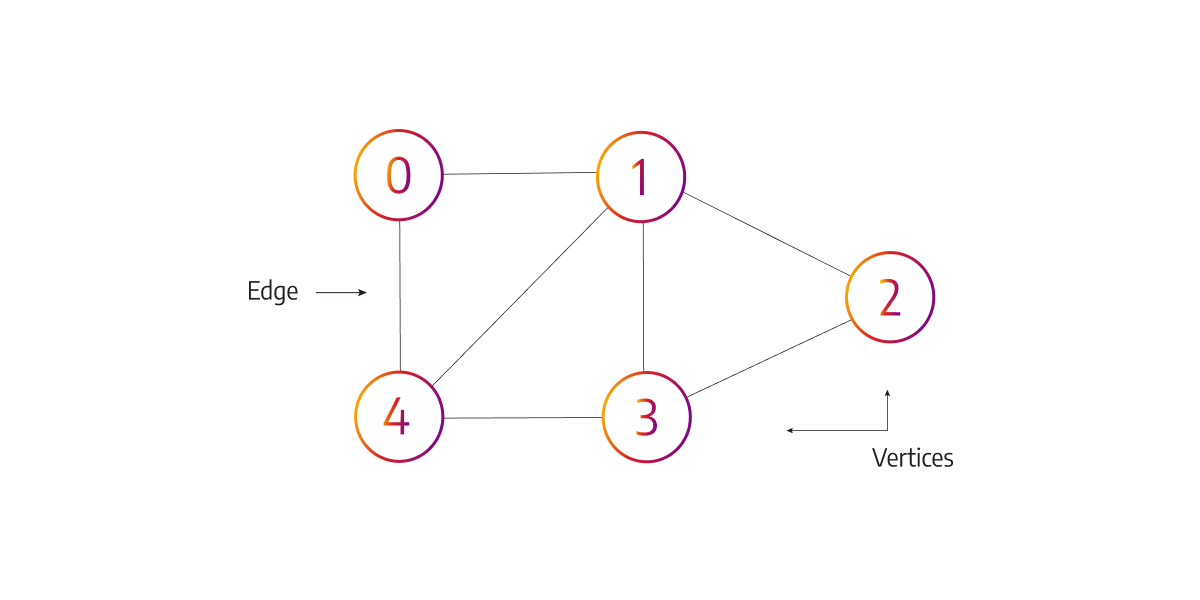 Every node can have its feature vector, which essentially describes that node with a vector of numbers. We can look at this feature vector as the representation vector of each node, also called embedding of the node. To avoid getting lost in technical details, graph neural networks work as a message passing[2] system, where each node aggregates feature representations of its 1-hop neighbors. To be more precise, nodes don’t aggregate feature representations directly, but feature vectors obtained by dimensionality reduction using the W matrix (you can look at them as fully connected linear layers). This matrix projected feature vectors are called messages and they give expressive power to graph neural networks.

This idea originates from the field of graph signal processing. Now, we don’t have time here to explain all about how we got from signals to message passing, but it’s all math. Feel free to drop us a message on Discord and we will make sure to create a blog post explaining the graph neural network introduction topic, not a simplified version, but one explaining all of it from the beginning, somewhere about Tutorial on Spectral Clustering in 2007.

If you would like to get a better understanding of graph neural networks before continuing, I suggest you check out:

The reason why we added GNNs to MAGE is that GNNs are to graphs what CNNs are to images. GNNs can inductively learn about your dataset, which means that after training is complete you can apply their knowledge to a similar use case, which is very cool since you don’t need to retrain the whole algorithm. With other representation learning methods like DeepWalk, Node2Vec, Planetoid, we haven’t been able to do that until, well, GNNs.

Now, why temporal graph neural networks? Imagine you are in charge of a product where users interact with items every minute of every day, and they like some and hate the others. You would like to present them with more items they like, and not just that, you would love it if they bought those new items. This way you have a stream of data. Interactions appear across time, so you are dealing with a temporal dataset. The classical GNNs are not designed to work with streams, although they work very well on unseen data. But it is not all nails if you have a hammer - some methods work better on streams, others on static data.

As you already know, we in Memgraph are all about streams. 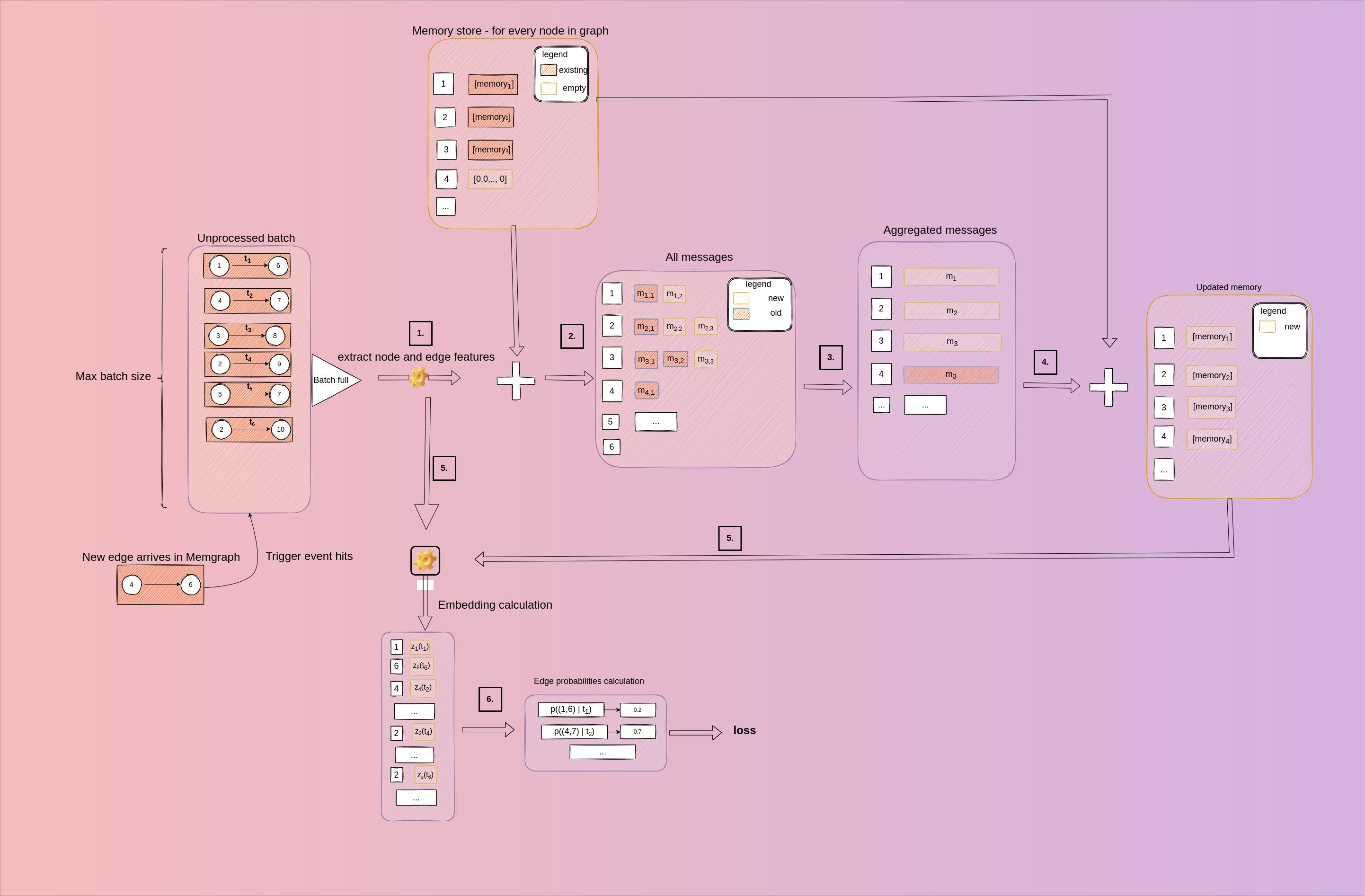 Firstly, in continuous-time dynamic graphs, you can model changes on graphs that include edge or node addition, edge or node feature transformation (update), edge or node deletion as time-listed events.

There are two embedding module types we integrated into our TGN implementation:

There is a certain problem when dealing with embedding updates. We don’t update embeddings for every node, only for ones that appear in a batch. Also, in order not to get so much into implementation details, we will try to abstractly explain the following problem. Nodes in the batch appear at different points in time. That’s why we need to take into account when was their update so that we can only use neighbors which appeared in the graph before them. This is in case we update the whole representation of the graph with batch information, and then do the calculation, which is what we did. This leads to having a different computation graph for every node. You can see what it looks like in the image below: 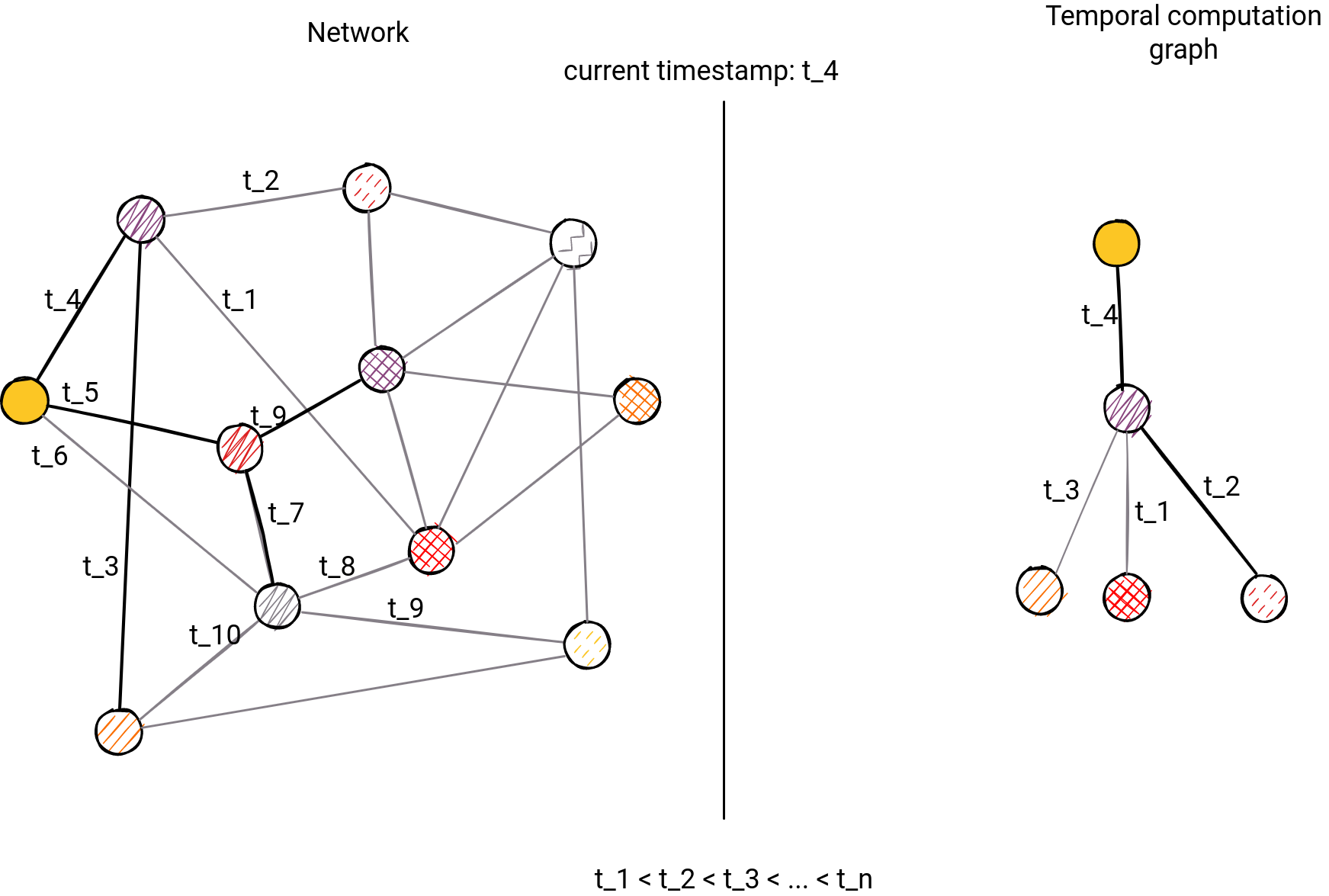 To try out how this works, we have prepared a Jupyter Notebook on our GitHub repository. It is about Amazon user-item reviews. In the following example, you will see how to do link prediction with TGN.

Through this short tutorial, you will learn how to install Memgraph, connect to it from a Jupyter Notebook and perform data analysis on an Amazon dataset using a graph neural network called Temporal graph networks.

For this tutorial, you will need to install:

Docker is used because Memgraph is a native Linux application and cannot be installed on Windows and macOS.

After installing Docker, you can set up Memgraph by running:

This command will start the download and after it finishes, run the Memgraph container.

We will be using the GQLAlchemy object graph mapper (OGM) to connect to Memgraph and execute Cypher queries easily. GQLAlchemy also serves as a Python driver/client for Memgraph. You can install it using:

Hint: You may need to install CMake before installing GQLAlchemy.

Maybe you got confused when I mentioned Cypher. You can think of Cypher as SQL for graph databases. It contains many of the same language constructs like CREATE, UPDATE, DELETE… and it’s used to query the database.

Let’s make sure that Memgraph is empty before we start with anything else.

You will load an amazon product dataset as a list of Cypher queries. This is what it looks like: 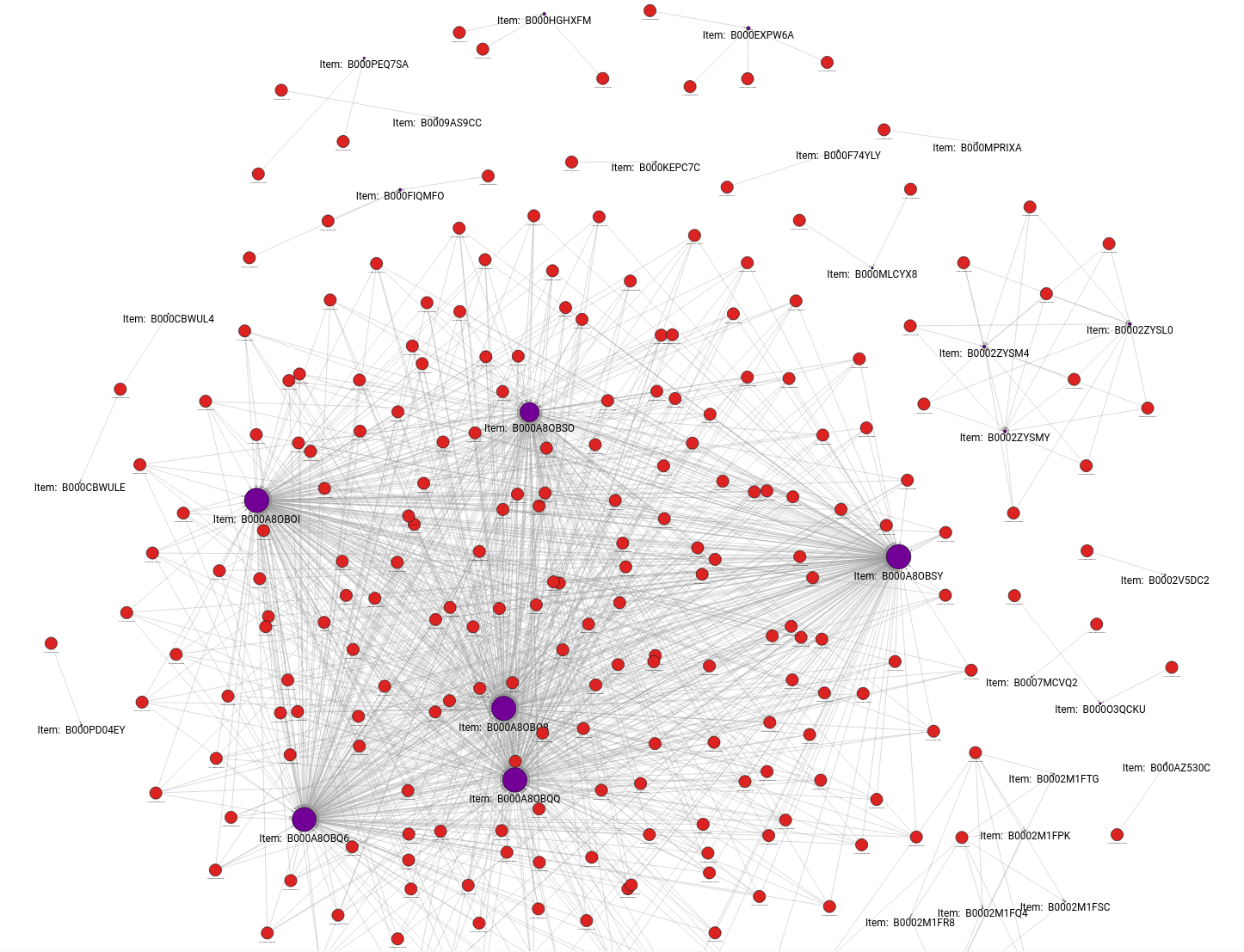 An example of the aforementioned queries is the following one:

So as you can see, we have User nodes and Item nodes in our graph schema. Every user has left a very positive review for an Item. This wasn’t the case for all the reviews in our original dataset, but we processed it and removed negative reviews (all reviews with review_score <= 3.0). Every User has an id and every Item that has been reviewed has an id as well. In this one query, we find the User and the Item with mentioned ids or we create one if such User or Item is missing from the database. We create an interaction event between them in terms of an edge which has a list of 20 edge features. This edge_features we created from user reviews:

We should have also prepared features for a User and Item, but these features seemed enough for our example.

One more note: In this dataset of queries we already prepared for you, there is one query that will change the “working mode” of our temporal graph networks module to evaluation(eval) mode. When the mode of the tgn is changed it also stops doing training of the model and starts doing evaluation of the trained model. If you look inside the file, you should find the following query:

In order to process a dataset, we need to create a trigger on the edge create event if a trigger with that name doesn’t exist.

This check is a neat feature to have in your Jupyter notebook if you want just to rerun it without dumping the local Memgraph instance if you are not working with Docker.

Memgraph works best with indexes defined for nodes. In our case, we will create indexes for User and Item nodes.

In order to train a Temporal graph network on an Amazon dataset, we will split the dataset into train and eval queries. Let’s first load our raw queries. Each query creates an edge between User and Item thus representing a positive review of a certain Item by a User.

Before we start importing train queries, first we need to set parameters for temporal graph networks.

Now it is time to execute queries and perform the first epoch of training.

Now we need to change TGN mode to eval and start importing our evaluation queries.

After our stream is done, we should probably do a few more rounds of training and evaluation in order to have a properly working model. We can do so with the following query:

Now, let’s get the results and then do some plotting to check whether the precision increases between epochs. 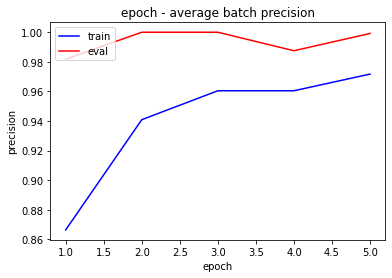 We can see that average accuracy increases, which is really good. Now we can start creating some recommendations. Let’s find Users who reviewed one Item positively and those who reviewed multiple Items positively. Our module will return what it believes should be a prediction score for yet unreviewed Items.

Now we can run the following query in Memgraph Lab:

And after applying a style, we get the following visualization. From the image below, we can see that most predictions are oriented towards one of the most popular items.

Well, I hope this was fun and that you have learned something. You can check out everything else that we implemented in the MAGE 1.2 release. If you loved our implementation, don’t hesitate to give us a star on GitHub ⭐. If you have any comments or suggestions, you can contact us on Discord. And lastly, if you wish to continue reading posts about graph analytics, check out our blog.

Temporal graph neural networks can be used to perform both label classification and link prediction. Learn how to create a simple graph recommendation engine using TGNs on an Amazon product dataset.