Skip to main content
Check out the Graph Database Performance Benchmark 🚀
This is documentation for Memgraph Docs 2.5.0, which is no longer actively maintained.
For up-to-date documentation, see the latest version (2.5.2).
Version: 2.5.0 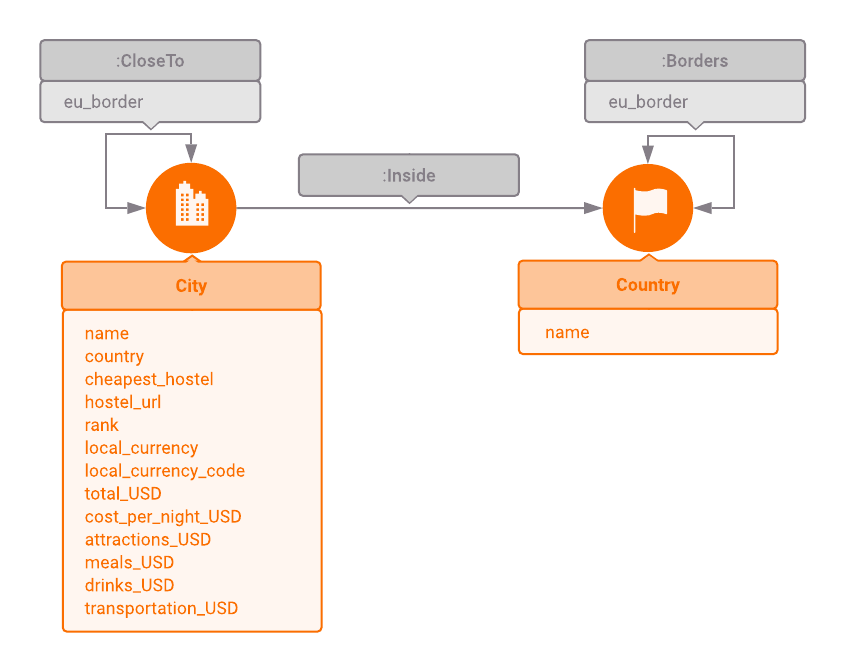 On the other hand, if you would like to add changes to the dataset, download the Memgraph Platform. Once you have it up and running, open Memgraph Lab web application within the browser on localhost:3000 and navigate to Datasets in the sidebar. From there, choose the dataset Backpacking through Europe and continue with the tutorial.

1. Let's list the top 10 cities with the cheapest hostels by cost per night from the European Backpacker Index.

2. Say we want to visit Croatia. Which cities does Backpackers Index recommend? Let's sort them by total costs.

3. What if we want to visit multiple cities in a single country and want to know which country has the most cities in the index?

4. We're on a trip from Spain to Russia and want to cross the least amount of borders. This is a great job for the breadth-first search (BFS) algorithm.

5. What if we're interested in going from Bratislava to Madrid with the least amount of stops? Also, we can't be bothered to switch currencies and want to pay with Euro everywhere along the trip.

6. This time we're going from Brussels to Athens on a budget. We're interested in the route with the cheapest stays. But there's a problem, we've lost our passport! Luckily, we're a European Union citizen and can travel freely within the EU. Let's find the cheapest route from Brussels to Athens with no EU border crossings. This is a good use case for the Dijkstra's shortest path algorithm.

8. We're on a trip from Paris to Zagreb and want to visit at least 3 cities, but no more than 5 (excluding the starting location — Paris). Let's list our top 10 options sorted by the total trip cost and number of cities in the path.