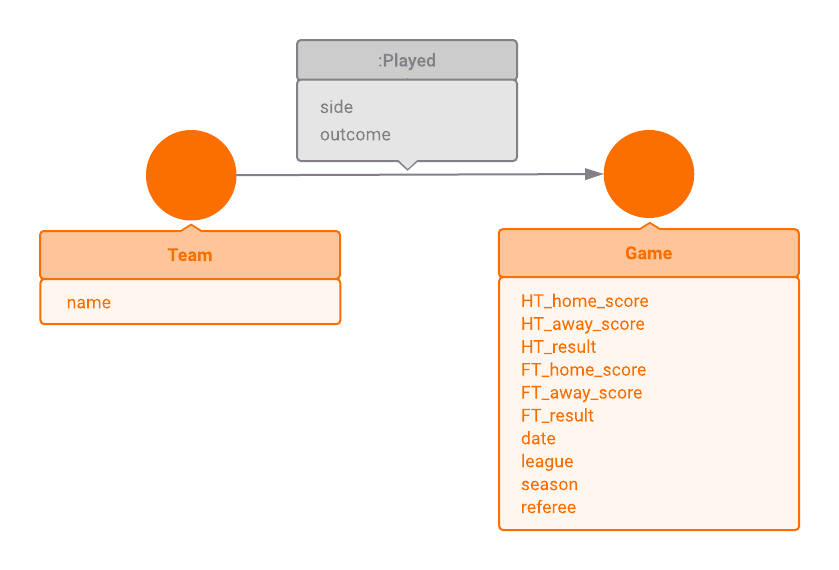 On the other hand, if you would like to add changes to the dataset, download the Memgraph Platform. Once you have it up and running, open Memgraph Lab web application within the browser on localhost:3000 and navigate to Datasets in the sidebar. From there, choose the dataset Football Premier league games and continue with the tutorial.

2. We have stored a certain number of seasons for each league. What is the oldest/newest season we have included?

3. You have already seen one game between Chelsea and Arsenal, let's list all of them in chronological order.

4. How about filtering games in which Chelsea won?

5. Home field advantage is a thing in football. Let's list the number of home defeats for each Premier League team in the 2016/2017 season.

6. At the end of the season the team with the most points wins the league. For each victory, a team is awarded 3 points and for each draw it is awarded 1 point. Let's find out how many points did reigning champions (Chelsea) have at the end of 2016/2017 season.

7. In fact, why not retrieve the whole table?

8. People have always debated which of the major leagues is the most exciting. One basic metric is the average number of goals per game. Let's see the results at the end of the 2016/2017 season. WARNING: This might shock you.

9. Another metric might be the number of comebacks—games where one side was winning at half time but were overthrown by the other side by the end of the match. Let's count such occurrences during all supported seasons across all supported leagues.