First, run Memgraph using the Memgraph Platform Docker image, which includes both the MAGE library and Memgraph Lab, a visual interface. To run the image, open a command-line interpreter and run the following Docker command:

2. Create and run a Python script​

Create a new Python script graph.py, in the code editor of your choice, with the following code:

To run it, open a command-line interpreter and run the following command:

Connect to Memgraph via Memgraph Lab which is running at localhost:3000. Open the Query Execution section and write the following query: 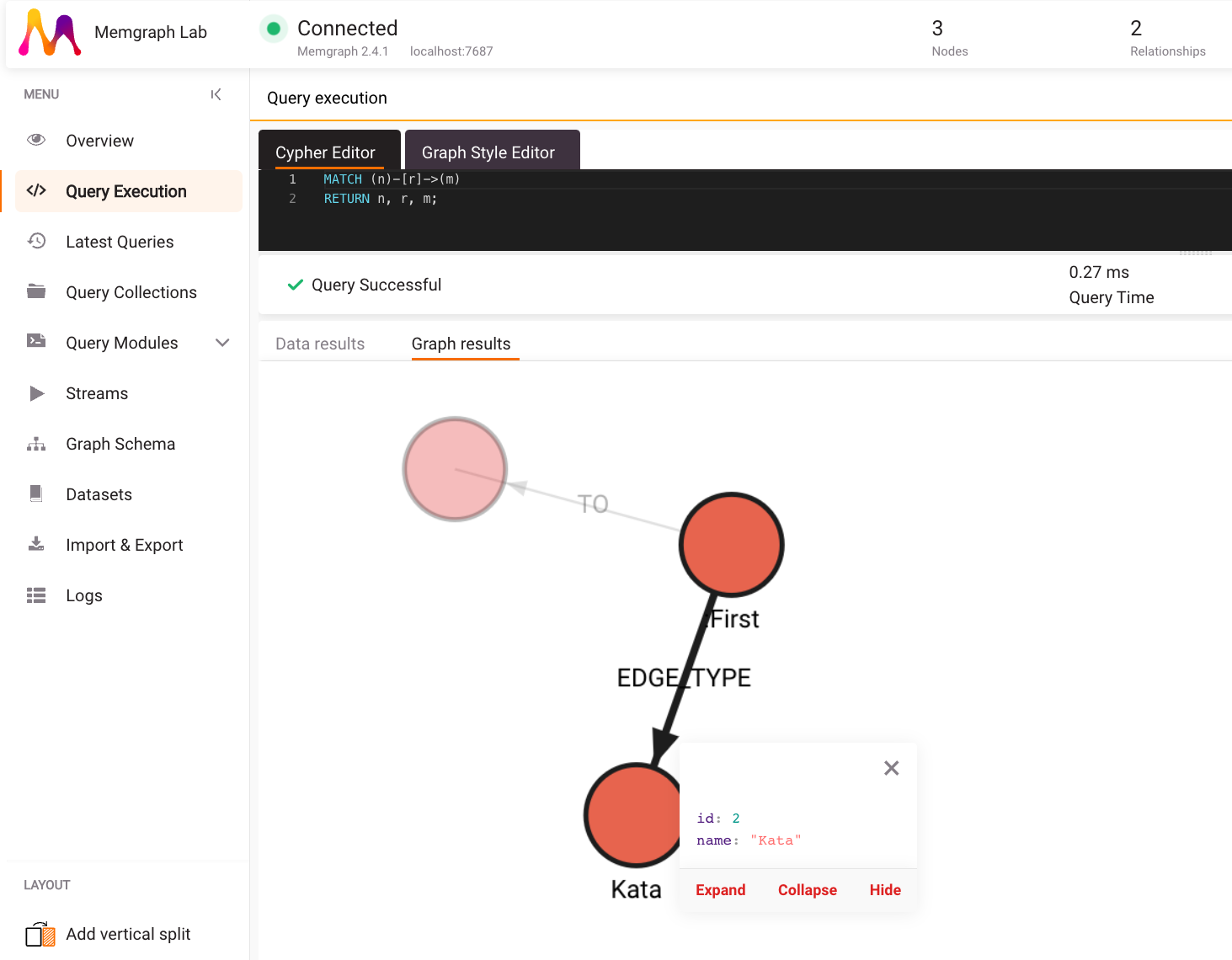 You can notice that the node with the property name Kata and property id 2 doesn't have a label. This happened because the property key labels was not defined. A relationship without a key type in the properties' dictionary is of type TO.

The available transformations in GQLAlchemy are:

These transformations use the NetworkXCypherBuilder that is based on NetworkXCypherConfig. NetworkXCypherBuilder object can yield queries depending on whether they involve index creation in the configuration or not. Hence, for nodes, there are two different procedures for the query creation: _nx_nodes_to_cypher_with_index and _nx_nodes_to_cypher. Since relationships can’t be indexed, there is only one procedure for the query creation - _nx_edges_to_cypher. All of the listed procedures use _create_node and _create_edge for each node or relationship.

By default, the node does not have a label and the relationship is of type TO. The identification number of the NetworkX node translates to the property id in the Memgraph node. If additional properties are defined in the dictionary of a node, they will be translated to node properties in Memgraph. Be careful with the keywords labels and type in the properties' dictionary. Those are reserved for node label and relationship type definition. The following code will create a graph with nodes that have the property id of values 1, 2 and 3. Only node with id 1 has label First. Other nodes are not labeled.

The code above translates into the following a graph inside Memgraph: These kind of transformations follow the mentioned schema, but if you want to customize it, you can contribute to the GQLAlchemy with a new transformation.

If you want to learn more about using NetworkX with Memgraph with interesting resources and courses, head over to the Memgraph for NetworkX developers website. To learn how to utilize the NetworkX library with Memgraph, check out the how-to guide on Memgraph documentation.